Why would Aryzta shareholders take part in €800m cash call? 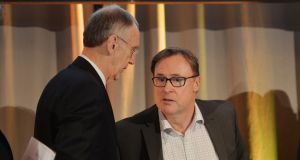 The only surprising aspect of Aryzta’s announcement yesterday that it plans to raise €800 million in fresh equity was the actual amount. The Irish-Swiss baker of Cuisine de France bread and burger buns for McDonalds, has seen its shares fall by about 30 per cent in two weeks, precisely because the markets believed the group would tap investors for more cash.

However, most analysts believed that rather than €800 million, Aryzta would seek about €300 million. They calculated that this was what it needed to cut its net-debt-to-earnings ratio to below four times, the level agreed with its banks.

The group itself confirmed that full-year earnings would be somewhere between €296 million and €304 million. Meanwhile, observers believe net debt is around €1.6 billion, a ratio of five times-plus.

Aryzta will also seek amendments to its credit terms and press ahead with efforts to raise €450 million from selling non-core businesses. The biggest chunk of this should come from disposing of its 49 per cent stake in French frozen goods retailer, Picard.

Many expected Aryzta to announce progress on this front by the year end, but that did not happen. Assuming the group announces an agreement in the coming weeks or months, it would be unlikely to complete the sale before 2018 is out.

Against this background, why would shareholders shell out €800 million? If they do, it will be for two reasons. One is that they actually expected to be asked for more cash all along, something its recent share price falls indicate.

The second is that its relatively new management team, led by chief executive Kevin Toland (he took charge in September 2017), is wrestling with the consequences of their predecessors’ mistakes. The fund raising and asset sales allow them to start again with a clean slate and a more focused business. At least, that’s the plan.