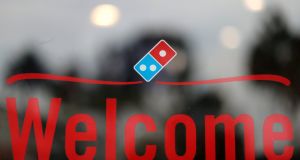 Domino’s reported group-wide revenues of £616m across its 1,200 stores to the beginning of July, up 12.8%. Photograph: Reuters

Ireland’s weather over the first half of the year, from unseasonal snow storms to summer heatwaves, was partly to blame for the modest 2.5 per cent increase in sales at the local arm of Domino’s Pizza, according to the company.

The UK and Irish master franchise holder of the fast-food group, which also includes its operations in some other northern European markets, is listed on the stock market in London.

It reported group-wide revenues of £616 million (€687m) across its 1,200 stores to the beginning of July, up 12.8 per cent. This included revenues of about £30 million (€33.4m) in Domino’s 50-strong Irish unit, which mostly consists of sub-franchised pizza takeaways.

Yet despite the impressive sales growth achieved mainly through an aggressive expansion outside Britain, the group’s profits before tax rose by just 2.5 per cent to £45.7 million (€51m).

Domino’s attributed this to difficulty controlling the costs of its international expansion, particularly in Norway. It has also been expanding heavily in Switzerland and Iceland. The group’s net debt trebled to about £180 million (€200m).

While Irish sales rose 2.5 per cent in euro terms, it was 5.4 per cent when translated back into its reporting currency of sterling.

Domino’s said it was taking steps to fight perceptions about its value for money in the Irish market.“ In addition, prolonged periods of adverse weather have also affected sales,” it said.

Irish online sales were up more than 15 per cent. It said Ireland remained “highly profitable for the group”.

Domino’s recently opened its 50th Irish store in Ringsend, Dublin. Its recent Irish expansion came after a six-year hiatus on new stores in this market.