Larry Goodman moves firms to make use of Luxembourg setup 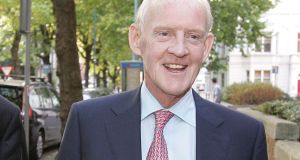 Larry Goodman’s business empire is making increasing use of tax and financing arrangements based in Luxembourg with two of his major group companies shifting residency there over the past year.

While the core business of one of Ireland most successful businessmen, ABP Food Group, has its headquarters in Ardee, Co Louth, and operates plants in Ireland, Britain, Poland, the Netherlands, Denmark, Austria and Spain, important parts of its corporate structure are based in Jersey, the Netherlands, and Luxembourg.

The group appears to be making increasing use of Luxembourg. During 2018, KH Holdings moved there from Jersey. Another company, Aburg, moved from Malta to Jersey in 2017, and to Luxembourg last year.

The movement of the companies has hugely increased the amount of money that is being loaned out of, or channelled back to, Luxembourg, as part of inter-group arrangements that can serve to reduce tax charges.

Among the companies receiving loans from KH Holdings is Setanta Centre, an unlimited Irish company associated with the centre on Nassau Street, Dublin, where the group is planning a €100 million redevelopment.

The four Goodman companies based in Luxembourg give a partial glimpse of the profitability of one of Ireland’s most valuable privately-owned businesses.

The accounts of the companies include details about two Irish subsidiaries, Ebolowa and Arlesse, a Jersey company, Lorsden (Jersey) Ltd, and two companies based in the Netherlands (Kanev and Parma Investments).

The two Dutch companies produced profits of more than €61 million and had net equity at year’s end of more than €308 million, while Lorsden made a profit of €9.99 million.

Mr Goodman has been one of Ireland’s most successful business figures for more than 40 years.

The fact that his business group was owned by way of one or more entities in Liechtenstein was first revealed in The Irish Times in 2015.

At the time Mr Goodman wrote a letter to The Irish Times in which he said the ABP Group, “which is headquartered in Ireland and has successful operating plants in Ireland, Britain, Poland, the Netherlands, Denmark, Austria and Spain, pays substantial millions in corporation taxes on the profits earned and is tax compliant in all jurisdictions in which it operates.”

Mr Goodman also issued a short statement in which he said he was tax resident in Ireland and fully tax compliant.

As part of the ongoing battle over the ownership of the Blackrock Clinic, one of tis founders, Dr Joseph Sheehan, is seeking to hear evidence about the Goodman structures in Liechtenstein, through which the Goodman stake in the clinic is owned. An appeal of a decision made in the High Court last week is not likely to be heard for a year or more.