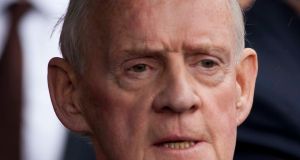 Larry Goodman’s Goodman Group is one of the most successful family-owned businesses in Ireland but it does not publish accounts that show its overall profit. File photograph: Eamonn Farrell/Photocall Ireland

Nine companies in the Goodman Group made a profit of €170 million last year and had assets worth more than €3.45 billion, accounts filed in Luxembourg indicate. The bulk of the profits were booked in Luxembourg and were largely untaxed.

The group, founded by Larry Goodman (81), is one of the most successful family-owned businesses in Ireland but it does not publish accounts that show its overall profit.

The core business of the group, ABP, is headquartered in Ardee, Co Louth, and is one of Europe’s largest meat processors.

It will be hugely affected by the proposed Mercosur trade agreement which will see, among other things, 99,000 tonnes of cheaper South American beef being allowed into the European market every year.

As well as its meat business, the Goodman group also has interests in commercial property in Dublin as well as in the Blackrock and Hermitage clinics in the capital, and Galway Clinic.

Four Goodman companies based in Luxembourg – Silverbirch Investments, KH Holdings, Aburg and Parlesse Investments – are used for intergroup financial transactions: getting loans from, making investments in and giving loans to other group companies.

Between them the four companies, which have no employees, produced profits of €123 million in their most recent financial year, paid almost no tax, and had approximately €2.5 billion in assets at the end of March 2018.

One of the advantages that can flow from using Luxembourg for intergroup financing arrangements is that the taxable profits of companies in other jurisdictions can be reduced by way of payments made to the companies in Luxembourg, which in turn pay little or no tax.

The accounts of the four Luxembourg companies also give details about two Irish subsidiaries, a Jersey company and two companies based in the Netherlands.

The Goodman Group’s complex corporate structure is headed by entities based in Liechtenstein that do not publish financial accounts or details as to who their beneficiaries are.

A spokesman said he had no comment to make about the latest Luxembourg company filings.