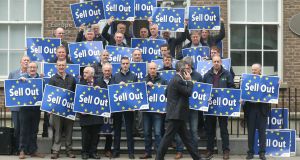 IFA president Joe Healy leads IFA national officers and members in a protest at the EU Commission offices in Dublin on Friday, depicting the Mercosur trade deal as a ‘sell out’. Photograph: Finbarr O’Rourke

A landmark trade deal between the EU and a number of South American countries including major beef producers has been sharply criticised for “selling out” both Irish farmers and environmental standards.

On Friday the European block and Mercosur - a regional alliance of Brazil, Argentina, Paraguay and Uruguay - announced the trade breakthrough following two decades of on-off negotiations.

It will slash tariffs on everything from Argentine steaks to German car parts, a considerable achievement in a global trading environment consumed by ongoing US-Chinese tensions.

However, while the accord makes the EU the first major economy to strike a comprehensive trade deal with Mercosur since its foundation in the early 1990s, it drew furious reaction from Irish agriculture on Friday.

“This represents a backroom deal with big business and kowtows to the likes of Mercedes and BMW in their drive to get cars into South America. It is a disgraceful and feeble sell out of a large part of our most valuable beef market to Latin American ranchers and factory farm units.”

In a statement after the deal was announced, Phil Hogan, the EU’s Commissioner for Agriculture conceded it would present “some challenges” to European farmers.

“The European Commission will be available to help farmers meet these challenges. For this agreement to be a win-win, we will only open up to agricultural products from Mercosur with carefully managed quotas that will ensure that there is no risk that any product will flood the EU market and thereby threaten the livelihood of EU farmers,” he said.

Brussels has estimated the deal will wipe out about €4 billion in annual customs duties on EU exports, securing preferential access for European goods and services to a region of more than 260 million people.

Mr Healy said the IFA’s priority concern was domestic beef production, a €3 billion sector which he said was more important to Ireland than any other EU member state. He added that Irish and European farmers held up the highest safety and environmental standards, something that could not be said for competitors in Brazil.

The association’s national livestock chairman Angus Woods said Ireland could not allow the sector to be “ruined by Brazilian beef imports”.

There was a similar backlash from the Irish Creamery Milk Suppliers Association (ICMSA) which said a substantial increase in beef imports to the EU would constitute “a massive blow to the Irish beef sector and will destroy forever the EU’s credibility on putting forward measures to combat climate change”.

“Everyone knows that increasing the amount of South American beef that can be imported into the EU will have immediate and irreversible consequences for the global climate,” he said.