Futureproof: Kerrigans Craft Butchers has evolved over the years, offering value during recession, and moving to meet the growing trend for healthy eating 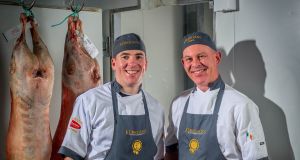 Barry and Shane Kerrigan of Kerrigans Craft Butchers: “At this point we can cater for most health goals, whether people are looking for gluten-free, low-salt, no carbs or low fat content products.,” says Barry

In 1973, Brendan Kerrigan realised his life’s ambition when he opened his own butcher’s shop in what was then the brand new Donaghmede Shopping Centre on Dublin’s northside.

Kerrigan had started working in butchery at the age of 13 and, in time, his sons Shane and Barry and their sister Brenda, followed him into the family business.

Kerrigans was not immune to the chill of the recession. However, it mitigated the impact by reacting quickly to cash conscious customers’ demands for cheaper cuts of meat.

While others struggled to manage the downturn, Kerrigans continued to grow, and today Kerrigans Craft Butchers employs 40 people and has outlets in Donaghmede, Baldoyle and Malahide.

“Our profits fell in the recession but we kept our turnover up,” says Barry Kerrigan, who joined the family firm in 1993. “People still had to eat, but they cut back on prime cuts and started buying cuts for casseroles and stews. They became very value-conscious so we started doing special-offer trays that gave them a lot for their €20.”

In 2007, Kerrigans invested in rebranding and changed its name to Kerrigans Craft Butchers. Its Donaghmede outlet was struggling to keep up with demand so, in 2009, the company opened a 3,500sq ft unit in the Baldoyle Industrial Estate. This provided much-needed storage and an additional 600sq ft of retail space. Three years later, Kerrigans opened in Malahide.

Barry says meeting customers’ expectations on value for money was key to keeping things going during the slump, but the company also introduced other products to pique customer interest, such as easy-cook ready-to-eat meals and healthy-eating options.

Each Kerrigans outlet employs 12 people (including four apprentices) with four in the head office, which is run by Brenda Kerrigan. Shane and Barry run the business day-to-day.

“You’ll still find us behind the counter,” Barry says. “We’re happier mixing with customers than sitting behind a desk.”

In 2011, Barry became a dad for the first time – an event that turned out to be significant on both a personal and professional level. Kerrigans had already begun to offer high-protein, low-fat meat options for health-conscious customers, but when Barry decided to get fit following the birth of his daughter, it kickstarted an interest in eating well that has since transformed a traditional craft butcher into an online business selling fitness meats nationwide and into the UK.

“You need to be fit for kids these days and this sparked my curiosity in nutrition,” Barry says. “Then, when we opened our Malahide store, our staff all had a keen interest in fitness and nutrition. This led to a lot of conversations around how we fuelled ourselves for training. We all agreed that food preparation took too long and that there’s only so much chicken and broccoli you can eat. We knew that turkey and chicken burgers would be super easy to cook and decided to load them up with our favourite seasonings, herbs and spices.

“Originally, we only made them for ourselves as we didn’t think anyone else would be interested but, over time, customers with similar interests in fitness kept telling us that they too were struggling with meal prep. We started handing out free samples and were blown away by the response. We subsequently launched Foods for Fitness in May 2013.”

World spread (especially through social media) and Kerrigans began getting people from all over Ireland driving to their stores to buy the products.

“People kept asking us to deliver but we were hesitant as we knew the difficulties around selling online,” Barry says. “In November 2015, we decided to give it a month’s trial and we sold to capacity. We started looking at our processes to make sure we could handle volume orders and officially launched kerriganmeats.ie in December 2016. Throughout 2016, we shipped 10,000 boxes and are on track to double this in 2017. We also plan to broaden the site to offer a complete online butcher’s shop.”

The company, which has its own dietician, has recently taken on an e-commerce manager to look after its online business. It is very active on social media and has 21,000 followers on Instagram and 7,000 Facebook likes.

Throughout 2016, Kerrigans had a steady stream of enquiries from the UK about getting product delivered there. “Again, we were hesitant given the logistics, but we decided to try, and began our delivery service to UK mainland at the end of May. We ship product on a Monday and it’s with customers on a Wednesday morning,” Barry says.

Another recent Kerrigan invention is the “Fake Away”.

“These are take-out meals given a healthy twist,” says Barry. “So instead of chips and chicken done in batter, we do sweet potato fries and tasty chicken without the batter.

“At this point we can cater for most health goals, whether people are looking for gluten-free, low-salt, no carbs or low fat content products. With our turkey burgers, for example, we usually have 10 flavours on the go and keep changing them with different spices and fresh herbs. We also put nutritional information on all of our packs so people know exactly what they’re getting.”