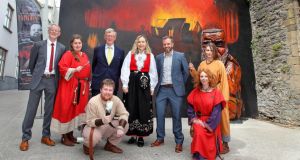 Picture yourself down low, moving across the sea in thick fog. Suddenly Viking ships loom towards you and dead bodies float in the water. You check yourself and remove your visor to make sure you won’t fall off the goatskin-covered bench you’re sitting on, but quickly put the it back on again because the immersive virtual reality (VR) experience is just too exciting.

This is the work of Emagine – the company whose project King of the Vikings, funded by Fáilte Ireland, Ireland’s Ancient East and Waterford City and County Council, opened last week in Waterford city.

Emagine co-founder and joint managing director Peter Grogan says the company tended to punch above its weight from the early days. A turning point 11 years ago was winning a Tourism Ireland contract to run and manage its online and offline library of stock images. Current clients include Flahavan’s, Bord na Móna and the Museum of An Garda Síochána.

The company has frequently used the eTenders procurement system to gain contracts. Their projects include president.ie – the website of Áras an Uachtaráin.

“We got to have our designs and ideas critiqued by President Michael D Higgins,” says Grogan. “He really got it. He didn’t care about the tech aspect but he really understood that the website was part of his legacy, so to speak, and that it was important to get it right.”

In 1999, Grogan was studying architecture and working part-time as the IT manager for an insurance company when he met Aaron Jay, who knew Brian Hickey through working at the same company.

“It was very much a case of working part-time – nights and weekends. I was in a less secure position than the others [he had dropped out of fourth-year architecture] so I took the leap and spent most of that first year building the foundation of the business, networking, researching and paving the way on a job-by-job basis until we got to the point where we could maintain another salary. Aaron then came on board full-time and Brian the following year.”

Emagine was formally established in 2001 and has two offices – one in Waterford and the other in Celbridge, Co Kildare. The business is somewhat split in terms of the work that goes on in each office and the team uses tools such as VoIP phones, online chat tools such as Slack and the project management system teamwork.com to communicate and share projects.

Grogan says Emagine treats every client with the same process each time, but admits that they are not the right fit for everyone.

“In the world of web and tech, companies are 10 a penny. If you want a website, you’ll get something from €100 to €100,000 so, from a sales point of view, we pick our battles. We prefer to do a large amount of work for a small number of clients. We want to forge relationships with those clients.”

Last year, the company merged with Wexford video content company Highwind Media bringing a whole new range of skills to the table. From a creative point of view, the company can now offer services from branding and logo design to web content and developing the website that holds the content.

While the hands-on approach of the founders has benefited the company over the years, it has also proved a challenge the three founders have had to deal with as the company has grown in recent years from having six members of staff to 16.

“We’ve always had a very flat structure, so we’ve been pushing towards a more tiered approach but it is hard to step back when the company is your baby. It’s about us learning to work as directors rather than employees and about hiring the right team to support that culture,” says Grogan.

“We have a team now that I admire and really trust. From a hiring perspective, to some degree, this business is a younger person’s game because it changes so quickly, so I think it’s important to hire someone who knows more than you.”

Grogan says that the business relies a lot on engagement from clients and that client involvement produces a better end product. However, the tech side is not something they push on clients. “We call it the sausage problem,” jokes Grogan. “Everyone likes sausages but no one really cares to know what goes into them!”

Last year James Tubbrit joined the company as chief VR engineer. “We’d worked with him on smaller bits and pieces and were waiting for a project that would formalise that relationship. As a result we were able to combine our creative experience, business acumen and VR skills to win the tender for King of the Vikings,” says Grogan.

Augmented and virtual reality are changing the scope of Emagine.

“There are a handful of companies in Ireland working in the VR space but I don’t think any of them have done something on the scale of our Viking project where we’ve produced the logo, the branding, the communications, the audio and video footage, the displays and the immersive VR experience,” says Grogan.

A focus on the travel and tourism market is likely to take centre stage into the future.

“It works so well from a tourism point of view. You can bring something to someone in a completely different country digitally,” says Grogan. “If you take the King of the Vikings as an example, you could have someone in Australia experiencing the same thing. So you’re bringing people somewhere they couldn’t go but you are also bringing someone somewhere in time that they could never go.

“You might even think of putting someone into the centre of the Olympic stadium – the potential is endless.”