Irish whiskey maker has attracted 185,000 visitors in its first two years in business 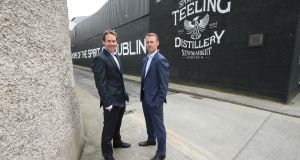 Stephen and Jack Teeling, who set up Teeling Distillery in Dublin’s Liberties in 2015.

Teeling Whiskey is planning a €500,000 extension of its distillery in the Liberties area of Dublin to expand its production facilities and event space.

The facility has attracted 185,000 visitors since opening, an impressive figure for a new distillery, with visitor numbers doubling in the past 12 months.

“To keep up with the demand for our whiskey and visitors to our distillery, we are investing a further €500,000 in expanding our production and our tasting and event space,” company co-founder Jack Teeling told The Irish Times.

The extension is due for completion by June 2018 and will coincide with the unveiling of the first fully matured whiskey produced in the Teeling distillery.

“Looking ahead to the next 12 months, we’re preparing to launch the first Dublin distillery-produced whiskey for more than 40 years as well as continuing to expand on global presence, in particular with increased promotional investment in key markets like the US, Europe and Asia.”

Teeling is now available in more than 50 countries, while in Ireland its whiskies are stocked in 800 bars and 1,700 outlets.

The company employs 85 staff – it had 30 at launch – with nine employees in the US, and representatives in Paris and Australia. A new role in Hong Kong has been established with the help of Enterprise Ireland.

Teeling is currently looking to hire two new distillers and five staff for its visitor centre.

1 Irish company to test vaccines on volunteers deliberately infected with Covid-19
2 Stripe wins more corporate customers, announces Salesforce deal
3 Will Facebook walk away from European market after data protection 'hissy fit'?
4 The wealth of the Irish – how do your assets match up?
5 Knock latest airport to weigh introducing pre-flight Covid-19 tests
6 Should I switch bank now with Ulster Bank at risk of closing?
7 Unemployment exceeded 23% in second quarter, CSO figures show
8 Dublin and Cork airports look at setting up pre-flight Covid testing centres
9 Dublin-based Ion buys former Mergermarket in deal worth over £1bn
10 South Dublin land at €19m has scope for up to 500 homes
Real news has value SUBSCRIBE