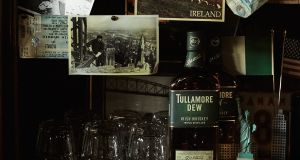 Irish whiskey sales in the US rose by 5.6 per cent last year to $1.1 billion (€1 billion) as exports of American spirits plunged on the back of retaliatory tariffs imposed by the European Union.

Ireland was the fourth biggest spirits exporter to the US in 2019 behind France, the UK and Mexico, according to new figures from the Distilled Spirits Council.

Its data show that spirits imported from Ireland rose 14 per cent last year, from $695 million to $794 million.

Overall, 4.9 million nine-litre cases of Irish whiskey were shipped to the US in 2019, with almost all of these being what the council termed “high-end premium products”.

Irish whiskey sales in the US topped $1 billion for the first time in 2018.

Alternative figures from International Wine and Spirits Research (IWSR), published last month, showed Irish whiskey sales were up 8.6 per cent in the US in 2019, versus a 13.5 per cent increase a year earlier.

The spirits council warned that the EU’s 25 per cent retaliatory tariff on American whiskey led to exports slumping by 16 per cent to $996 million.

American whiskey accounts for 65 per cent of all US spirits exports with the EU being its lead market. Following the introduction of tariffs by the EU, exports to Europe have fallen by 27 per cent.

A breakdown of the data shows major declines in key markets such as the UK, where volumes were down 32.7 per cent. Other big markets to show double-digit declines included France, Germany and Spain.

“The data is clear. These tariffs are chipping away at American whiskey’s brand equity in our top export markets. These great American whiskey products that have been the toast of the global cocktail scene are struggling under the weight of the EU tariffs,” said the Distilled Spirits Council’s chief executive Chris Swonger.

Irish whiskey producers are continually eying opportunities away from the US, which is by some distance its biggest market.

The Irish Whiskey Association this week welcomed the passing of a new free trade agreement between the European Union and Vietnam that will remove the 45 per cent tariff that is currently placed on whiskey exports to the country.

“Trade agreements like this will also help open up trade between Irish distillers and the rest of Asia. In turn, this will support more jobs in local Irish whiskey distilleries and more custom for Irish barley and grain farmers,” said head of the association, William Lavelle.

1 Ryanair and Eir the worst for customer service during Covid crisis
2 Irish elearning company LearnUpon closes €47.4 million investment
3 ‘Essential’ retailers risk a firestorm if they exploit the closure of the ‘non-essential’
4 Aldi to impose limits as Christmas toys go on sale
5 Fair deal? Family at odds with hospital and each other not so sure
6 Economists warn that GDP will fall again over Level 5 restrictions
7 What to consider if older person or loved one needs care at home
8 PlanNet21 eyes further acquisitions after buying rival eCom
9 Tinnitus group Neuromod raises €10.5m for expansion
10 Cabinet to agree on implementing EU travel plan
Real news has value SUBSCRIBE