End of an era as Bobby Kerr moves on from Insomnia 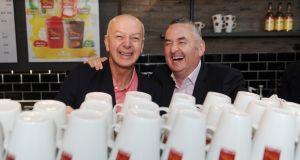 Businessman Bobby Kerr is to leave Insomnia, the coffee chain he established 20 years ago, after selling his stake in the company to other shareholders.

Mr Kerr said he intended to focus on his broadcasting career, which includes presenting two popular radio shows on Newstalk.

Mr Kerr held just under a one-third stake in Insomnia via a company called BHJ Holdings Limited. The other main shareholders are current chief executive Harry O’Kelly and John Clohisey, who is to become the company’s chairman.

Insomnia, which began life in a bookshop in Galway, is one of the largest Irish coffee chains, with a portfolio of 150 stores between Ireland and Britain, some of which are in partnership with retailers such as Spar and Mace. The company also has more than 350 self-service machines in operation in Ireland and the UK.

Insomnia employs about 400 people directly throughout Ireland along with a further 350 people through its concessions and franchised stores.

Mr Kerr served as the company’s chief executive until 2010, when he switched roles to become chairman.

“This is a very bittersweet day for me, Insomnia has been such a big part of my life for nearly two decades and I am very proud of what I achieved here. I will miss the work and the people, many of whom I have formed lifelong friendships with. However, I look forward to the next chapter for me and my family,” he said.

The company also announced that chief finance officer Barry Kehoe had joined the board of directors, while Dara O’Flynn had been appointed chief operating officer of the company earlier this month.

1 More than 40% of help-to-buy recipients already had deposit
2 Owner of Dundrum Town Centre to sell prized assets
3 Most workers now expect ability to work from home part-time
4 Help-to-Buy bonus; a taste for working from home; and two landmark deals
5 Stocktake: Is the shoeshine indicator flashing red for stocks?
6 Elderly parents living in property you own will save you on capital gains tax
7 56 financial firms entered or expanded Irish operations in 2020
8 Microsoft to press on with TikTok deal after call with Trump
9 Law governing construction pay rates remains pending State appeal
10 Pilita Clark: Working from home is starting to pall
Real news has value SUBSCRIBE