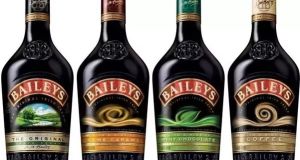 Sales of Irish cream liqueur brands are on the up again

Global sales of Baileys and other Irish cream liqueur look set to break the 100 million bottle barrier for the first time this year as they rebound after a “lost decade” during which the spirit went out of fashion.

Having been marketed as a distinct category since the 1970s after it was invented in late 1974, sales soared up until the 1990s but then growth plateaued.

Between 2012 and 2016 sales of Irish cream liqueur in Ireland declined by 11.2 per cent, from 108,000 cases to 95,900 cases. However, that trend has now reversed, with preliminary figures from Nelsen suggesting the value of sales in the all-important Irish off-trade sector have increased 3.4 per cent this year.

That boost is also replicated elsewhere, with William Lavelle, head of the Irish Spirits Association, forecasting that global sales will top 100 million bottles in 2017, up from 90 million last year.

“What we’re seeing is that Irish cream producers have been busy rebranding and bringing out new flavoured products such as salted caramel. The result is that consumers are looking at cream liqueurs again. People are responding to the product differently and that is paying off,” said Mr Lavelle.

While sales are on the up, the ISA, a body that represents 38 spirits producers and brand owners, said it has become increasingly concerned about the rise of non-authentic brands on the market. So much so that it has just launched a new “love Irish cream liqueur” campaign to highlight the provenance of genuine brands.

Authentic Irish cream liqueur is protected by an EU-recognised geographic indication distinction that shows it has been produced in Ireland.

“We intend to work with embassies around the world and through the Bord Bia network, distributors and retailers to promote the distinction and the authenticity of the product to ensure that people buy Irish,” said Mr Lavelle.