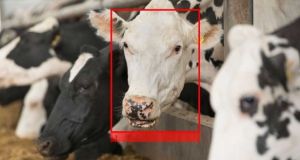 Cainthus, an Irish agtech start-up that has developed facial recognition for cows, is seeking to raise more than $50 million (€42m) from investors.

The Dublin-based company, whose backers include Cargill, one of the largest privately-held corporations in the US, was founded by brothers David and Ross Hunt in 2016. It is currently led by Aidan Connolly, who served for many years as chief innovation officer at Alltech, an animal nutrition company founded by the late Pearse Lyons.

Mr Connolly said Cainthus was seeking to raise $51 million from backers, but did not say how far the fundraising had proceeded.

Cainthus uses breakthrough predictive imaging to monitor the health and wellbeing of livestock. Its proprietary software uses images to identify individual animals based on hide patterns and facial recognition, and tracks key data such as food and water intake, heat detection and behaviour patterns.

The software then delivers analytics that drive on-farm decisions that can impact milk production, reproduction management and overall animal health.

The company’s imaging technology can identify individual cows by their features in several seconds to memorise an animal’s unique identity, recording individual patterns and movements.

That information is used as part of an artificial intelligence-driven mathematical algorithm that conveys imagery into feed and water intake analysis, behavioural tracking and health alerts that can be sent directly to farmers.

Cainthus made headlines around the world two years ago when it was announced that Cargill was to take a minority stake in the company, and had agreed a strategic partnership with the start-up to bring its groundbreaking technology to dairy farms across the world.

Minneapolis-based Cargill is still owned by the same family that established the company 155 years ago. It is one of the world’s largest crop traders and meat producers. The company has 155,000 employees in 70 countries, and more than 20,000 staff working for its animal nutrition business.