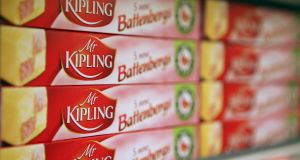 Premier said to support the demand growth in Mr Kipling, it would launch a new range of ‘Signature’ cakes in the second quarter. Photograph: Chris Ratcliffe/Bloomberg

The company said group sales rose 1.1 per cent in the 13 weeks ended June 29th, helped by a 10 per cent rise in Mr Kipling sales, which was relaunched last year.

Group sales in Britain rose 2.6 per cent, while international sales fell 18 per cent as sales in Ireland slowed due to the unwinding of Brexit-related stock in Irish customers’ supply chains.

The company said it expected the international business to return to sales growth in the coming quarters, even as it continues with its strategic review.

He was under shareholder pressure following a drop in the share price after a takeover attempt by US food maker McCormick & Co fell through three years ago.

The Ambrosia rice pudding maker is still on the lookout for a permanent chief executive.

The company said Cadbury cake sales grew in the UK because of the later timing of Easter compared to last year, and improved seasonal ranges.

Premier said to support the demand growth in Mr Kipling, it would launch a new range of “Signature” cakes in the second quarter.

The company, which stuck to its full-year guidance, said it expects better performance in the second half of the year.