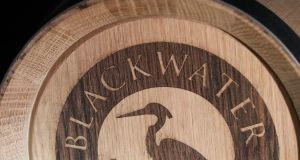 The new distillery in Ballyduff, near Lismore in Co Waterford, commenced whiskey distillation on Tuesday.

Blackwater Distillery in Co Waterford has becomes the 21st operational Irish whiskey distillery, and one of the first in the world to embrace blockchain technology.

The new distillery in Ballyduff, near Lismore in Co Waterford, commenced whiskey distillation on Tuesday.

The distillery, which will open to the general public for tours early next year, will produce single malt and pot still Irish whiskey. It will also continue to produce its popular range of Blackwater Irish gin.

The number of distilleries in Ireland has skyrocketed in recent years. At the start of the decade there were just four in operation. More than 20 other distilleries are due to enter production in the coming years, with at least five of these due to open in the coming months.

Blackwater Distillery has followed early adopters such as Dunfermline-based Adelphi Ardnamurchan Distillery in embracing blockchain technology with every bottle of whiskey produced to feature a symbol that allows customers to scan and access full information on the production journey.

Figures published by the Central Statistics Office earlier this month show the value of Irish whiskey exports grew 10.1 per cent during the first eight months of the year.

Irish whiskey is the fastest growing premium spirit in the world with sales growing at more than 10 per cent a year in more than 75 countries.

The Irish Whiskey Association (IWA), which originally set a target of doubling global sales of the spirit from six million nine-litre cases to 12 million by 2020, Â recently announced plan will see sales double to 24 million by 2030.