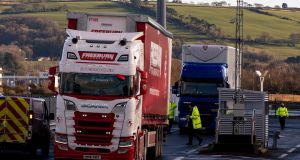 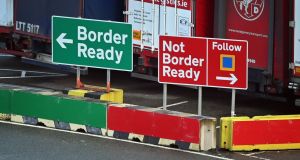 Signage indicates the direction vehicles should follow depending on the relevant paperwork for crossing to Ireland at the check-in area at Holyhead port in Anglesey, north Wales. Photograph: Paul Ellis / AFP

The first week of post-Brexit life in Ireland has been a difficult, stressful time for traders, hauliers and State officials trying to navigate seas of red tape created by new EU-UK borders.

And this is before anything close to the normal level of freight that moves between Ireland and Britain has resumed after the festive period, and the benefits of pre-Brexit stockpiling runs out.

Freight volumes are still way down on what is typical at this time of year, so the disruption this week is only a minor foretaste of the tests facing businesses and State officials on border controls.

Anyone anticipating a “Y2K” moment or false warnings around “Project Fear” only needs to sit in an Irish-bound lorry turned away from a ferry at Holyhead for not having correct paperwork, or in a truck in Dublin Port awaiting a consignment check to know both are incorrect.

The effect of a new Irish Sea trade border has already been keenly felt just eight days after Brexit: ferries have been cancelled, lorries have been denied boarding, trailers have been parked up in haulage yards, custom rules have been eased, fresh-food aisles at Marks & Spencer have remained near-empty, and online sales have new charges or been cancelled to Irish customers.

Parcel courier DPD became the latest company to change operations because of Brexit, pausing road delivery services into the European Union, including Ireland, from the UK.

Goods simply are not moving and businesses, importers and hauliers are pulling their hair out at the vast bureaucratic procedures they have to complete and at the mess this has created.

“It is just something completely different and we are just not used to the friction. It is proving challenging and frustrating,” said Andrew Kinsella, managing director of Gwynedd Shipping in Holyhead which has 60 of 500 trailers parked up in Britain waiting to board ferries for Ireland.

Who is to blame is another issue. The message from some State officials can be summarised simply as: we told you so. Revenue said on Thursday night that they have been warning for at least two years that vast changes were coming and traders needed to get Brexit ready, and the difficulties that industry has faced this week was “the outworking of that warning”.

“It has been flagged but businesses never contemplated that it would be this complicated or would be implemented on the Irish Sea or have these consequences for Irish-British trade,” said Aidan Flynn, general manager of Freight Transport Association Ireland.

“There are obviously teething problems with any new IT system, but this goes beyond that.”

Businesses complain that the Revenue’s IT customs system is not fit for purpose as they try to work through three levels to secure numbers at each level to be able to move to the next, sifting through an alphabet soup of acronyms to complete customs and regulatory procedures in addition to complex sanitation processes for food and plant consignments.

There are struggling at each level: the safety and security record known as an entry summary declaration, or ENS; the customs import or export declaration to generate a movement reference number or MRN; and the pre-boarding notification, or PBN, to be able to get a lorry onto a ferry.

The blockages in long-running supply chains from Britain to Ireland became so bad this week that the Revenue on Thursday night issued an emergency ENS code to allow businesses to get through the safety and security level, but businesses say Revenue needs to do the same for PBNs.

“The problem is that they have introduced a new three-tier IT customs system that is totally new with no time to parallel-run or debug or test,” said customs agent and goods transporter Owen Cooke, chairman of logistics group Independent Express and the Pallet Network storage.

“It is just chaotic. The whole economy is being brought to a standstill on this and they are insisting that there is nothing wrong with the system. Brexit should have caused a problem for Britain but all it is doing is closing down the Irish economy.”

The Revenue said on Friday that its systems were “operating fully and correctly” and that “without exception” every system-related query that it has investigated “was a user error rather than a system error.”

Revenue said that traders were finding it difficult to compile or complete the required customs declarations “because, in some instances at least, the Brexit preparation messages reiterated by Revenue over at least the last two years, unfortunately for the businesses concerned, went unheeded.”

A specific problem has arisen with goods arriving into Britain from the EU for onward distribution back to EU markets, including Ireland.

Because of the specific terms of the post-Brexit EU-UK trade agreement, when goods are unpacked and repacked - and not subject to further manufacturing - then tariffs, or customs duties, apply when the goods are reimported back into the EU.

This is a particular issue for Ireland, said Carol Lynch, a partner with consultants BDO, given that Ireland is often supplied from hubs in Britain by major supermarkets and food companies.

While it was clear that goods and components coming from outside Britain might face tariffs when re-exported from Britian to EU markets, the fact that it applies to EU originating goods has taken companies by surprise.

About 410,000 roll-on, roll-off lorries and other goods vehicles carry consignments into Ireland every year, while there are more than 1.2 million trailers heading out of the country into Britain with just 150,000 driving on across the British “landbridge” to mainland Europe.

If things are bad now, they could become a lot worse - unless processes are simplified. Otherwise there will be more delays, more goods stuck in distribution centres or transit, and more empty supermarket shelves.