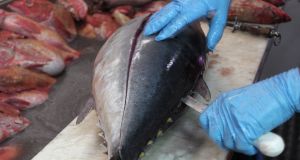 Norfish Ltd was given three months to pay a €25,000 fine. Photograph: iStock

A Donegal fish-processing plant which was found to be tampering with its weighing scales has been penalised a total of €45,000.

Byrne, of Roshin Road, Killybegs, was given a six-month suspended prison sentence and ordered to pay €10,000 to a local hospice and a further €10,000 to the Donegal Branch of the RNLI.

This prosecution followed a joint investigation by the NSAI (National Standards Authority of Ireland) and the Sea-Fisheries Protection Agency.

They found an electrical switch fitted to the company’s flow scales used to weigh incoming fish catches. It could be used to turn off the scales, allowing the fish to pass over without being weighed.

Tampering with measuring instruments used in trade and rendering them inaccurate as a result is an offence under the Legal Metrology Act 1996, the NSAI said in a statement on Wednesday.

“Today’s outcome recognises the seriousness of the offence. We take non-compliance in any sector, whether it’s the fisheries sector or any other sector covered under our legislation, very seriously,” said NSAI head of legal metrology Paul Turner.

“We will continue to be very vigilant in this sector and if we find any further non-compliance in this area, we will use the full powers of the legislation available to us to deal effectively with it.”

1 Fianna Fáil may have just pressed the pause button on the property market
2 UK to prioritise EU trade deal over one with United States
3 Who are Ireland’s 17 billionaires?
4 Saudi prince’s WhatsApp account ‘directly involved’ in Bezos hack
5 European investor acquires Harcourt Road offices for €55m
6 My father in a nursing home wants to gift me his house
7 Dunnes premature in challenging Point Village resolution move, Supreme Court finds
8 Are there annual limits on inheritances or gifts to a child?
9 Irish organisations struggle to comply fully with GDPR
10 Dublin Airport contributes €10bn to economy - study
Real news has value SUBSCRIBE