After almost 50 years, the society in Cork has annual turnover of about €60m 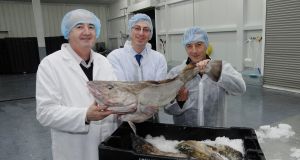 The Castletownbere Fishermen’s Co-operative Society celebrates its 50th year in business next year. Operating in one of the toughest industries across the world, the group has evolved into the largest fishing co-op and processor in the State, with an annual turnover of €60 million.

Many businesses have been successful in surviving one or two recessions, the co-op has overcome not only recessions but, changing markets, evolving EU regulation as well as the elements at sea.

John Nolan, managing director of the business, says: “The co-op started in 1968 when six fishermen came together to try to secure cheaper fuel prices. At that time, the men were selling the fish they caught directly to market and, by the time they had driven to the market in Cork or Dublin, they were likely coming away without profit.”

Nolan has been with the co-op 34 years. When he joined, the fishermen were salting herring they had caught on the pier and hoping to sell it at market. However, they were dependant on the Irish market and, if the fish didn’t sell at market, it was dumped.

“No fisherman likes dumping fish. The fishermen were also catching a lot of megrim, hake and monkfish but there was no market for those fish in Ireland at the time,” he says.

The co-op began to look to the Continent for markets and at first it was trial and error. “We began drift-netting for tuna,” says Nolan, “but the EU banned this for ecological reasons so we had to accept that. We now fish for tuna using pelagic methods. This means you are targeting only tuna and you’re not harming any other ecology.

“The Spanish didn’t like us going into the marketplace there,” he says. “There was a lot of rivalry between us for a few years.”

Apart from new markets, Nolan says it was always the co-op’s aim “to reduce the number of links in the chain. So we began doing business directly with a canning company in France so we can sell the tuna directly to them and continue to add the most value to our product”.

By the time the co-op came to build a processing factory, it was extracting roe from herring and exporting it to Japan. The roe was extracted from the fish just as they were spawning. It was then frozen and exported to Japan.

It was a very profitable market for the co-op. However, a committee was established to examine the sustainability of this and the majority of fishermen agreed to discontinue this type of fishing despite the financial losses.

“It was the right decision,” Nolan says. “The fishermen were thinking of the future of the industry and the fish stocks and, even though it cost them, they made the right decision and the EU respected them for it.”

The Castletownbere Co-op now sells herring fillets to German and Polish markets, and mackerel to the Nigerian market, as well as supplying fish to large brands such as Lidl, Aldi and John West. The fishermen also fish for prawns, which are prepared and frozen on-board.

The co-op recently secured a contract to supply Spanish retailer Mercadona with megrim, hake, monkfish and witches (a type of flounder).

“The chain has 1,575 shops across Spain employing 80,000 full-time staff,” says Nolan. “We supply all the megrim, hake and monkfish directly to the fish counters in those supermarkets. We also provide over 120 tonnes of prawns to the retailer.

“The person buying that fish gets their receipt and, on that, they can see the name of the boat, the day the boat went out and the day it landed and where the fish was caught.”

Mercadona was particularly interested in the co-op’s sustainability operations, Nolan says. “Working with Mercadona has made us more professional and they see us as a partner. We have had to think about our ‘green image’. We think about how we pack our fish, we invested €250,000 in solar photo- voltaic panels which will decrease our electricity cost by 10 per cent per year.

“Also, any rubbish that goes out on a boat comes back in with the boat and gets disposed of as ethically as possible.”

The co-op recently won Green Business of the Year at the Green Awards 2017.

Of the original six fishermen who started the co-op, two sons of both Joe O’Sullivan and Donal O’Driscoll are now fishermen in the co-op.

“Ninety-five per cent of the economic survival of Castletownbere depends on fishing,” says Nolan. “ We have never been afraid of change. We have had a lot of young people leaving the area and we have foreign nationals on our boats and working in our factory.

“The difficulty of the work, the hardship of the elements, they bind people together. Our people have no problem going the extra mile. They see we are trying of create jobs for people here.”

Now with a fleet of 69 fishing vessels, Castletownbere can have up to 360 people at sea and employs 120 people on shore. The co-op has securely established itself as one of the leaders in the Irish seafood sector and an invaluable part of the coastal communities of the Beara peninsula.