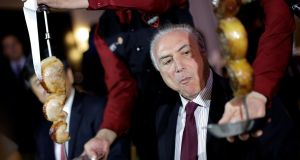 Brazilian president Michel Temer at a steak house after a meeting with ambassadors of meat importing countries in Brasília, Brazil on March 19th, 2017. Photograph: Ueslei Marcelino/Reuters

The European Union ambassador, and several other ambassadors from the bloc, met President Michel Temer on Sunday evening after Brazilian officials spent the weekend preparing technical reports designed to reassure major customers such as the EU, US, China and Russia that the country’s meat products are safe.

The claim was made by Brazilian federal police investigating an alleged bribery scheme they say involved payments being made to agricultural ministry officials to overlook unsanitary conditions at some meat-packing plants. Following a number of arrests on Friday, one police investigator said there was evidence that some plants improperly interfered with export certificates for Europe.

Over the weekend, EU ambassador to Brazil João Cravinho said the bloc was “profoundly preoccupied” and that it had sought “complete and urgent clarification” from Brazil’s agriculture minister Blairo Maggi.

In response Mr Maggi offered to meet the EU’s ambassadors in Brasília on Monday. Ireland will be represented at the meeting.

In an interview with Brazilian media at the weekend, Mr Cravinho said if the explanations provided by authorities were insufficient to ally health concerns the European bloc could suspend the importation of certain Brazilian meat products.

Brazil’s government has moved quickly to defend what it describes as the “robust” inspection regime of one of its key export industries. An official statement said a “few isolated facts are currently under investigation” following a tip-off from a civil servant in the agricultural ministry’s inspection department.

It said the police investigation and the response by agriculture ministry officials “are the clearest proof that our protection and oversight system is alert and fully operational, and further serve as a guarantee to consumers of the quality of our country’s agricultural and livestock products”.

The EU’s office in Brasília did not immediately respond to a question about whether its inspectors in Brazil had detected any problems before the police operation.

Large European customers of Brazilian meat, such as supermarkets and fast food chains, also conduct their own on-site inspections of their suppliers’ plants in Brazil.

The two largest companies named in the police operation, JBS and BRF, have both denied that they sold any contaminated meat and implied police investigators made their allegations while lacking a proper technical understanding of the industry.

In a statement BRF said the detection of salmonella in a shipment of meat to Italy cited by police investigators did not violate Brazilian or EU regulations.

Brazil’s government and the country’s meat sector are concerned last week’s police operation could be used by competitors in Europe as an argument against allowing Brazilian meat producers greater access to European consumers, a key aim of Brazil in trade talks between the EU and Mercosur, the South American trade bloc, of which it is the largest member.

The next round of negotiations between the two sides is due to take place in Buenos Aires at the end of the month. European farmer organisations, with the Irish Farmers Association prominent among them, have waged a long campaign against greater liberalisation in agricultural trade.

The IFA said last night that the investigation into practices in Brazil highlights the concerns about their level of standards and controls. “The EU Commission cannot consider any trade deal under these circumstances,” it said.

Sinn Féin agriculture spokesman Martin Kenny said Minister for Agriculture Michael Creed “must immediately look for a halt to Brazilian beef imports to Europe”, in light of the controversy.

He said quality Irish beef produced to the highest standards “should not be forced to compete with produce from countries where standards are non-existent in comparison”.

He added: “The whole situation serves to warn against international trade agreements such as CETA, which sets poor quality cheaper produce against the unique excellence of Irish beef.”