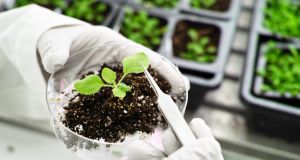 Campaigners warn that the new methods could cause unintended DNA damage with unknown consequences. Photograph: iStock

The European court has ruled that plants using new gene-editing methods must comply with the European Union’s directive on genetically-modified organisms.

The ECJ judges decided on Wednesday that EU’s rules should apply to crops made using new so-called mutagenesis techniques - which mix genes from within one plant species - because the risks linked to these new techniques might prove similar to those of the older-style GMO, which mixed traits from different plant species.

The court did note that conventional plant breeding mutagenesis techniques with “a long safety record” are exempt.

Campaigners welcomed the judgment. Greenpeace EU food policy director Franziska Achterberg said: “The Court makes it crystal clear that plants and animals derived from gene editing are subject to the same safety and labelling requirements as other GM organisms... Releasing these new GMOs into the environment without proper safety measures is illegal and irresponsible, particularly given that gene editing can lead to unintended side effects.”

Campaigners warn that the new methods could cause unintended DNA damage with unknown consequences.

However, biotech companies argue that the new techniques to alter the genes in plants should not fall under the EU’s GMO rules because they use only genes from the same species and argue that it is simply a faster, more precise industrialised method of long-trusted conventional plant breeding.

“As the resulting plant is something I could obtain naturally by classical breeding, we don’t see any reason why such a product should be subject to GM legislation,” said Mr Garlich v Essen, secretary-general of European Seed Association.

“It is a black Wednesday for plant breeding innovation in Europe” said Mr Essen. He also warned that many companies will no longer try to get these products licensed in the EU as they would now be “subject to the same mess of decision making that classical GMOs have be subject to for the past 20 year in Europe. We have no GMO for cultivation in Europe and I don’t see that is changing at this point in time”. – Copyright The Financial Times Limited 2018

1 ‘I’m so lucky to be in the Caribbean – a million miles from Derry Girls’
2 Joint accounts: if one of us dies, can the other access the money?
3 Tax and the Pandemic Unemployment Payment: Your questions answered
4 Ryanair expects air fares to fall when flights take off again
5 ‘The recovery needs to be a full-scale economic renewal’
6 Household savings soar as consumers stop spending
7 Irish businesses urged to take advantage of opportunities in Germany
8 Covid-19’s impact on the economy makes for grim reading
9 Pharma research company APC to open R&D unit at Cherrywood
10 Judge rules property fund to pay costs of dispute over warehouse access
Real news has value SUBSCRIBE