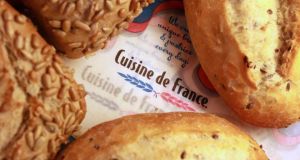 Aryzta, the company behind Cuisine de France bread, had net debt of €1.6bn at the end of January, the half-way point in its financial year

Aryzta shares hit new lows on Monday after an analyst warned that the Swiss-Irish baker would have to tap shareholders for further cash to cope with its debts.

Aryzta ended the day down 8.82 per cent at 11.315 francs on the Swiss stock exchange in Zurich.

The company behind Cuisine de France bread saw its stock plunge almost 20 per cent to 10 francs at one stage, a new 12-month low for Aryzta.

Investors deserted the stock after Fintan Ryan, an analyst with German bank Berenberg, argued that Aryzta would have to “resort to a capital increase to alleviate its chronic debt levels”.

Aryzta, which supplies burger buns to fast food giant McDonald’s, had net debt of €1.6 billion at the end of January, the half-way point in its financial year.

Mr Ryan’s downbeat assessment came following news at the weekend that ratings company Fitch criticised both Aryzta and Lion Capital for getting their jointly-held subsidiary Picard to borrow extra cash to pay them dividends.

Picard raised cash through a bond issue last year. The fundraising, meant to refinance debt, allowed the French company to borrow extra cash, which it subsequently did. This allowed it pay Aryzta a dividend of €35 million to follow a €53 million payout during the first half of the French-Swiss group’s financial year.

“It now looks like the European grain harvests will be significantly affected in the second half, resulting in continued raw material inflation,” he wrote. “As the pricing environment remains tough generally in developed markets, Aryzta is unable to fully compensate for the inflation, especially given its historical premium price positioning relative to the market.”

Shareholders in Aryzta have seen more than 20 per cent wiped off the value of their stake in the last five stock market sessions.

According to Bloomberg, the company is the biggest loser on Switzerland’s SPI Index in 2018. Year-to-date losses stood at 20.858 francs or 70.36 per cent at the close of business on Monday.

Aryzta, led by chief executive Kevin Toland, who took over the troubled group last year, issued a profit warning in May, saying that earnings before interest, tax, depreciation and amortisation, a measure of the cash that a company generates, would be between 9 and 12 per cent lower than originally predicted.

Analysts at Credit Suisse last week downgraded Aryzta’s shares, effectively suggesting that investors sell them, indicating that the company’s woes could force if to sell assets.