New figures show foreign direct investment from the State to US rose by €88.7bn last year 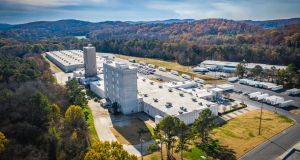 Kery Group currently employs nearly 6,000 people in 70 locations across the US

Kerry Group is to build a new $125 million (€110.4 million) US food manufacturing facility in Rome, Georgia. The announcement comes as new figures show foreign direct investment to the US from the Republic jumped by €88.7 billion last year to a record $235.7 billion.

The 360,000 sq ft facility plant, which will focus on developing food products, will be Kerry’s largest investment to date.

Construction is to begin immediately and is expected to be completed by early 2021.

Kery Group currently employs nearly 6,000 people in 70 locations across the US.

“This new facility will be one of the most advanced and modern food manufacturing facilities in the world which will support our customers as they produce tasty and nutritious food products which will be consumed all across the US and Canada,” said Gerry Behan, global president and chief executive of Kerry Taste and Nutrition.

The announcement was made at an Enterprise Ireland-hosted roundtable discussion on opportunities to advance partnerships between Irish and US businesses.

In December, Kerry narrowly missed out on the opportunity to buy the nutrition business of US chemicals giant DuPont. The deal would have been the biggest ever secured by an Iseq-listed company and would have seen Kerry double in size. Instead, rival International Flavors and Fragrances reached a $26.2 billion (€24.2 billion) agreement with DuPont for the business.

Last year was the second in a row where FDI to the US from the State rose sharply. The value of investment by Irish companies in the US from 2017 to 2018 jumped 72 per cent, from €85 billion to €147 billion, according to figures from the US Bureau of Economic Analysis.

The Republic remains the ninth largest source of foreign direct investment to the US.

Separate data from the bureau also shows the Republic is the fifth largest source of FDI with $385.3 billion on the basis of “country of the ultimate beneficial owner”. This measures not only investment by indigenous Irish companies but also international business with a base in the Republic.

Among the Irish companies that have a significant presence in the US are Glanbia, CRH Oldcastle and clinical trials company, Icon.

“We saw 75 client companies either setting up or expanding their presence in the US last year so it wasn’t a surprise to us to see the huge jump in investment,” Mr Davis said.

“About half of the total of clients making investments last year were companies focused on digital technologies. We also saw further activity from life sciences companies and from those involved in emerging technology, such as Cubic, which opened an office in Minnesota, and Taoglas, which established a new hub in Minneapolis,” Mr Davis said.