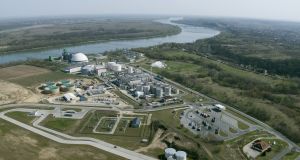 ClonBio Group’s biorefinery on the banks of the Danube in Hungary.

Irish-owned agribusiness company ClonBio Group has reported a 143 per cent rise in annual pretax profits to €95 million in 2019 after ethanol prices strengthened.

A good performance by its biofuels and protein-rich animal nutrition products also boosted the performance of ClonBio, which saw its turnover rise 26 per cent to €361 million.

The company’s core operating company, Pannonia Bio, is a maize-based biorefinery located on the banks of the Danube in Hungary, employing more than 250 people.

However, it warned that a deflation in ethanol prices this year would impact on its profitability in 2020.

Pannonia Bio was recently designated as an “essential company” by the Hungarian government, with a significant proportion of its monthly ethanol output now in use in the fight against coronavirus.

ClonBio founder and executive chairman Mark Turley highlighted the importance of biorefineries for clean energy, clean food and as a key input in sanitiser and other disinfectants, but said the company was “enormously disappointed” that the Irish Government “continued to drag its feet on biofuels”.

“ClonBio is pleased to play our part in the near-term fight against Covid. However, governments cannot lose sight of their longer term environmental obligations,” he said.

Mr Turley called on the Government to adopt the E10 motor fuel standard of 10 per cent ethanol and 90 per cent petrol.

“More than half of Europe now drives on E10, which can be introduced in Ireland at the stroke of the pen. Ireland’s reticence is inexplicable as E10 can deliver the same greenhouse gas savings as 100,000 electric vehicles relative to petrol on its own,” he said.

More than €65 million was invested by ClonBio in 2019 as part of a three-year investment programme of more than €150 million between 2019 and 2021. Under the plan, the company has entered the solar market with a €35 million investment to expand its renewables portfolio in Hungary.

“ClonBio’s continuing investment and diversification strategy means that our Group may be a very different business in five years’ time, albeit one that will retain environmental sustainability at its core,” Mr Turley said.