Irish Egg Association says there is a shortfall of about 1.5 million eggs as a result of bird flu 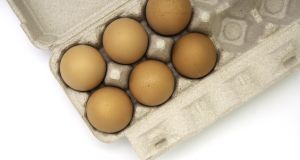 Egg production in the Republic has dropped by as much as 15%, according to the Irish Egg Association. File photograph: Getty

Ireland will likely have to continue to import eggs “for some time” as a result of a shortage of the product due to bird flu, a representative organisation has said.

The Irish Egg Association said an outbreak of avian flu in commercial poultry flocks has resulted in reduced egg production, creating a shortfall of between 1 and 1.5 million eggs.

The outbreak is concentrated in Co Monaghan, which is the main source of egg supplies in the Republic of Ireland.

“As a result of this loss of production, at a time of peak consumer demand in the last six weeks, a shortfall in supplies has emerged which has had to be filled by eggs from outside the state,” a statement by the association said.

“The drop in egg production is estimated to be of the order of between 10 per cent and 15 per cent, although it may be higher, while demand increased by reported figures of more than 30 per cent.”

The statement added: “However, these figures are estimates; as this is an evolving situation these figures may rise or fall and it is therefore likely that eggs will have to continue to be imported for some time to meet demand.”

This form of bird flu, known as H6N1, is highly infectious but does not kill birds in high numbers or pose a risk to human health.

Last month, the Department of Agriculture urged poultry owners, including backyard flock owners, to be vigilant in implementing strict biosecurity on their premises, by ensuring only essential personnel, vehicles and equipment have access to their flocks and minimising contact between poultry and wild birds.

Flock-owners should also regularly monitor their birds for signs of disease, the department said. If they suspect avian flu they must report it immediately to their veterinarian or to a regional veterinary office.