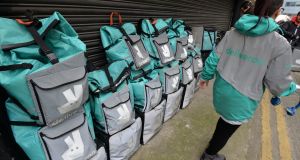 ‘Deliveroo has made efforts throughout the Covid-19 crisis to ensure that food and convenience delivery can be conducted safely,’ the company said. Photograph: Alan Betson

* Food delivery company Deliveroo is branching out in light of Covid-19, signing deals with several convenience store brands to offer a grocery delivery service to customers.

The company has signed up outlets under the Spar, Fallon & Byrne, Londis, and Mace brands to allow customers shop on its app for household goods and then get them delivered by a Deliveroo rider.

Under the new system, called “essentials”, Deliveroo’s more than 1,000 riders will pick up orders placed through the company’s app and deliver those to customers’ doorsteps in as little as 30 minutes.

The company said it was still talking to Musgrave convenience group, Centra, about a similar deal though nothing has yet been finalised. Deliveroo had earlier named Centra among its new convenience grocery partners.

“Deliveroo has made efforts throughout the Covid-19 crisis to ensure that food and convenience delivery can be conducted safely,” the company said. All deliveries will be contact free, so riders will not hand deliveries over to customers but leave them outside their front door for collection.

Deliveroo said that it is up to the independent operators it is working with to decide what they sell on the website, but that typically they would have a scaled back version of their store offering.

The delivery fee is variable, but is charged in the same way the delivery fees for a restaurant are charged. Depending on an outlet’s proximity to a customer, the fee could range from 99 cent up to €4.99.

Asked whether the commission regime for the grocery retailers would be similar to that for the restaurants on its service, Deliveroo said it doesn’t “discuss commissions of any partner”. The company typically charges commission ranging from 20 per cent and 30 per cent of the total cost of a meal.

“Alongside our work with restaurants, we have been working hard with off-licence partners such as Spar, Londis and Mace to make it easier for customers to get access to day-to-day food and household items quickly as they limit trips outdoors,” said Deliveroo Ireland general manager Michael Healy.

Deliveroo launched a similar service in the UK on Tuesday, delivering basic goods from 130 Morrisons stores. Around 70 products have been made available on the UK service where a delivery fee of £4.99 will be in place.

Deliveroo currently has more than 1,200 restaurants on its books across the State. The privately held company works in 12 markets in more than 500 towns and cities. The company, which launched in the Republic in 2015, works with more than 1,000 riders here to deliver from restaurants in Dublin, Cork, Limerick and Galway.

Four decent bottles if you’re just getting to know wine, including a great-value sparkler

1 Michael Smurfit: ‘I asked Trump to invite me to the White House for my 80th birthday’
2 Household savings soar as consumers stop spending
3 ‘I’m so lucky to be in the Caribbean – a million miles from Derry Girls’
4 Small businesses are cannon fodder in zealous anti-virus experiment
5 ‘Never mind GDP; the most fundamental job of any leader is to keep his people alive’
6 ‘The recovery needs to be a full-scale economic renewal’
7 Iput secures €200m in ‘green finance’ for delivery of new LinkedIn HQ
8 ‘It’s safe to fly’, EU aviation safety boss says
9 Tax and the Pandemic Unemployment Payment: Your questions answered
10 Irish business of Carluccio’s restaurants to be wound up
Real news has value SUBSCRIBE