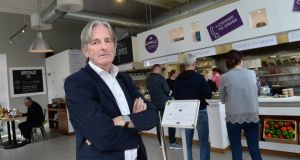 Restaurant chain Camile has written to its landlords saying it will halt the next rent payments on its 31 outlets here and in the UK to safeguard the business.

Revenue at Camile, founded and run by Irish businessman Brody Sweeney, has fallen 25 per cent. It continues to deliver to customers but has shut its restaurants for dining in, takeaway and collection following Covid-19 restrictions.

A letter to landlords from chief financial officer Warren Codd asks them for understanding and co-operation “as we halt the next rental payment in order to safeguard our future”.

Mr Sweeney confirmed on Thursday that his company had written to landlords for itself and on behalf of franchisees but said this was an opening negotiating position rather than a final step.

“We needed to communicate out first of all that things have changed and we needed to have a discussion with our landlords,” he said.

“The starting position is that we have cancelled all our direct debits on our outlets in the Republic. But we are not expecting not to pay any rent. That’s not reasonable at all.”

Mr Sweeney said that about half the landlords contacted had responded, with half of that group allowing the company to withhold rents for a period and the others saying Camile was obliged to pay.

The company, which specialises in Thai cuisine, has done the same with its four outlets in the UK, with a similar response, he added.

However, one landlord described the move as opportunistic and argued that fast-food delivery was one business booming as a result of the crisis.

The landlord noted that they depended on rent from Camile and other tenants to meet their own financial commitments.

Mr Sweeney stressed that the company was open to discussing the problem with its landlords. “We are not trying to profit from this situation, we’re trying to preserve our cash,” he said.

He noted that while some landlords were institutions, others were smaller businesses or individuals that relied on the income from rents to cover their own obligations. “We totally get that,” Mr Sweeney said.

Camile pays an average of €40,000 rent a year for each of its 27 Irish restaurants. Mr Sweeney agreed that maintaining 75 per cent of its sales was a good performance in the face of the crisis but warned that this could change easily.

“Also, it’s the difference between making money and not making money – the last 25 per cent is where you make your profit. It would not be sustainable in the longer term,” he said.

Camile owns some restaurants and has 17 franchisees, which sub-lease their outlets from the company.