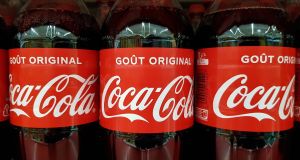 Coca-Cola’s quarterly revenue beat market expectations on Thursday, driven by demand for its signature soft drinks, flavoured Cokes and Fuze teas, sending its shares up as much as 2.8 per cent to a record high.

The company said fourth-quarter revenue growth was led by its trademark Coca-Cola, that included products such as caffeinated beverage Plus Coffee and Zero Sugar soda.

Retail sales of its flagship brand rose 6 per cent, chief executive James Quincey said, adding that volumes in the brand were positive for the second straight year.

The world’s largest beverage maker has been pushing into flavoured soft drinks, coffees, teas and low-sugar beverages to attract consumers who move away from sugary drinks.

The company is also expanding its portfolio and bought dairy company Fairlife earlier this month after spending about $5 billion to buy Costa Coffee last year.

Excluding one-time items, Coca-Cola earned 44 US cents per share in the fourth quarter to the end of December, meeting Wall Street expectations. Net revenue grew 16 per cent to $9.07 billion, beating an analysts’ estimate of $8.89 billion.