Teenagers at home? Do what we did and get them cooking dinner for the family 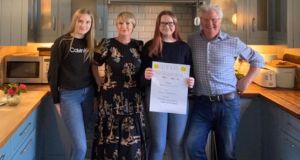 I’m sitting outside and it’s sunny, but cold. The dog is beside me, but at any time she might catch a glimpse of the cat and bolt. Three times yesterday she took off, it’s as if she’s milking every moment of us being at home. She’s like a one dog Disney movie, a fluffy blur in the fields below us with the girls chasing after her. We thought we had her trained but she’s gone rogue all of a sudden.

Something special is happening tonight, it’s a kitchen takeover in the Flynn household. There was an Instagram row last night and the youngest one threw the toys out of the pram. You would think it was us berating them but no - it was the other way around.

For some reason, I don’t find Instagram easy. Like maths, I’ve made up my mind that it’s beyond my intellectual capacity. I co-opted number one daughter to help me for an intermittent weekly wage, but we’ve spent so much time on it in the past few days that the tension is palpable and combustive.

Last night at dinner we sat around a stodgy toad in the hole, glaring at each other. Then number two said she wanted us all off the phones the following day. She was going to open a restaurant , cook dinner and we all had to eat and be happy about it.

Drinks were at 6pm (we have her well trained).

Before you say “Oh how wonderful”, this has never happened before. I’m happy but nervous. My back is to the kitchen. I suspect I won’t be able to go in for some time as I’ll pass out from the mess.

My girls are no different to other children, or am I deluding myself? When they were very small I was thrilled when they slurped mussels in Honfleur. They developed a long lasting love of sushi that continues to make other children gag and gasp. They can wield chopsticks like little ninjas .

Back when we could travel, we brought them to Il Rinconcillo in Seville, purportedly the oldest restaurant in Spain, where we fought over almejas, little clams in garlic and olive oil.

In saying all of this, I’m keenly aware that I am in danger of raising entitled caviar eating monsters. This is where we meet reality. The early promise of gastronomic greatness has withered. Number one will pretty much eat anything, but number two will gag at the sight of a green vegetable.

The affinity with brown food is imbedded in every Irish child it seems. I was no different. Burgers and pizza would be in the top three of my girls’ favourites along with chips, and pasta close behind .

They have loved baking from when they were tiny though. I learned to put my OCD aside for the greater good. Coming home to two flour-coated cuties after a hard day made me forget any stresses. Their little efforts made our house a home.

They do Home Economics at school but in truth they don’t seem to have much interest. I’ve seen the recipes they are given and I always think, perhaps unfairly, no wonder they’re not interested. Then I realise not every house is as obsessive about food and cooking as us.

They have no interest in learning from me either. They just ask what’s for dinner and arrive when it’s ready.

Frustratingly, I see them eat things on holiday, like a famous onion risotto we had in Lake Garda. But when I recreated it at home it was a resounding thumbs down. “It’s not like the one in Campangiola.” I know what you’re thinking, I think the same as I grit my teeth.

“Wait till you’re in college,” I often say. “You will long for Daddy’s dinners as you eat your beans on toast.”

So back to tonight. I can hear them beavering away. Number two has written a menu. It’s sweet. She’s also the master of ceremonies, maitre’d and main course chef. Number one is on dessert, wash up and general bouncer duties if things go pear shaped.

Máire and I had to make a reservation; that’s when we found out how she planned to deal with intolerances and life choices. There are rules. We have to dress up. We can’t give out or fight.

The menu reads like this: Selection of ‘snackie’ bits. This I’m led to believe will consist of olives, salami, crisps, pate and roasted chicken skin (ok the last one was me , I couldn’t throw it in the bin).

Dessert is raspberry chocolate brownie, then “Maybe cheese, it depends.” Hopefully she doesn’t mean it depends on how much wine we drink.

I have a gin and tonic in front of me now. The dog is calm and so am I.

Is that the time? I must get changed for dinner.

THE FLYNN FAMILY’S RECIPES FOR A BIG NIGHT IN

Ingredients
1tbsp olive oil
6 chicken thighs, skin and bone removed
400g pasta of your choice
250ml carton of cream
Salt, black pepper and a little nutmeg if you have it
100g grated Parmesan

2. Heat the olive oil in a large non-stick frying pan until gently smoking then add the chicken.

3. Cook for 10 minutes or so until the chicken is golden and crisp. Season with salt and pepper then remove to cool a little and shred with two forks.

4. Cook the pasta as per packet instructions.

5. Meanwhile add the butter to the frying pan and scrape the crispy chicken bits from the bottom over a low heat. Add the cream to the pan followed by the chicken and bring to a simmer.

6. Drain the pasta and add it to the pan. Season and serve with lashings of Parmesan on top.

This recipe came by way of Aoife Ryan (@babaduck), who in happier times very kindly dropped a brownie cake into the girls when she was passing. It has become their favourite chocolate treat. Thank you, Aoife.

1. Preheat an oven to 180 degrees Celsius, or equivalent and line a square baking tin with parchment.

2. Melt the chocolate and butter together gently in a decent sized bowl. (You can do this in the microwave on a low setting). Let cool for 15 minutes.

3. Set aside 100g of the raspberries and purée the rest.

4. Whisk the eggs and sugar together until pale and frothy. Add the puréed raspberries and mix.

5. Pour in the chocolate and fold in well, making sure you scrape the bottom of the bowl for any of the egg mixture.

6. Fold in the flour and pour the mixture into the baking tin.

7. Press the reserved raspberries into the brownie mixture at intervals, the aim being to have them centred when you cut them into squares.

8. Bake for about 30 minutes, until the top is cracked and shiny but the mix still squidgy in the middle.

9. Allow the brownies to cool for 10 minutes before cutting them into squares and dusting with icing sugar. This also makes a fabulous cake; just give it a little more time in the oven.

We must consider the negative health consequences of the lockdown
8