But company says decline is in line with expectations 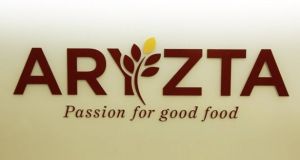 Swiss-Irish food group Aryzta says it plans to raise up to €800 million by selling off various parts of the business, which may include the group’s troubled US arm.

Chairman and interim chief executive Urs Jordi said the proceeds would be used to reduce debt, which is currently €1.7 billion, and improve the company’s balance sheet.

He was speaking to analysts after the company posted a 20 per cent fall in revenue for the first quarter of its financial year as the pandemic hit its food service business.

The embattled group, which has seen a boardroom coup and the resignation of its chief executive Kevin Toland in recent weeks, said improvement in quick serve restaurants and retail channels were offset by Covid-19 related declines in foodservice as restrictions to curb the spread of Covid-19 were re-introduced in many European countries.

Aryzta, which owns the Cuisine de France brand here and supplies the likes of McDonald’s, Subway and Lidl, is the subject of a non-binding takeover bid from US hedge fund Elliott, which values the group at €735 million.

However, the company’s main shareholders are vehemently opposed to the deal, which they claim undervalues the business.

Mr Jordi said there had been a number of expressions of interest in purchasing various parts of Aryzta.“Together with our advisers, we are currently assessing these and all alternatives will be explored and considered,” he said.

Mr Jordi said the company’s debt level was unsustainable and needed to be reduced.

“Our target is to raise between €600 million and €800 million from selected disposals,” he said, putting a timeline of six-nine months for the transactions.

Mr Jordi also hinted he may be in the job of chief executive for one to two years while the company finds a successor to Mr Toland.

Shareholders have been agitating for an overhaul of Aryzta, with one of its largest backers Cobas involved in the September shake-up that saw Mr Jordi take over as chairman from Gary McGann.

In a statement accompanying the results, Mr Jordi said: “The next phase of Aryzta’s journey back to improved performance, reduced complexity and the empowerment of local teams has commenced.”

“ Our new business model changes to a simpler country focus model with deeper customer relationships,” he said. “This will lead to organic growth, lower costs and improved margins, and all of this guided by the significantly enhanced bakery, financial and turnaround experience at governance and operational level.”