A week dominated by cyber attacks and the housing crisis 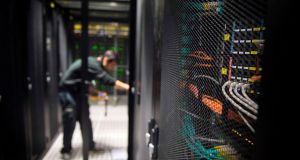 Cyber attack: As it turned out, confirmed cases in Ireland were very limited – this time. Photograph: Martin Bureau/AFP/Getty Images

It was likened to the equivalent of the American military having some of its Tomahawk missiles stolen, and, no doubt, last weekend’s global cyber attack served as a wake-up call for states the world over in terms of protecting key infrastructure from online threats.

State agencies and businesses were instructed to be on high alert as they returned to work on Monday, for fear the “ransomware” virus that infiltrated 200,000 computers in 200 countries worldwide could spread through the State.

As it turned out, confirmed cases in Ireland were very limited, although some affected businesses may have preferred to keep their heads down. Both the business lobby Ibec and small and medium-sized enterprises group Isme said their members escaped damage but that many firms were proactively upgrading cyber security following the incident.

Indeed, following the attack, investors bought up stocks expected to benefit from a pick-up in cyber-security spending by firms and government agencies.

Later in the week, Health Service Executive chief information officer Richard Colrbridge said it would be “relatively easy” for a cyber attack to cripple entire sectors of State infrastructure.

“There will be more cyber threats,” he said. “My own gut feeling is that health is now a target across the world . . . We’ve got to deal with this by explaining to people how relatively easy it is to cripple whole parts of countries.”

Corbridge appears to be on to something. Criminal hacking groups reportedly repurposed a second classified cyber weapon stolen from US spies before making it available on the so-called dark web after the success of initial attack.

The hacking tool, developed by the US National Security Agency and codenamed Esteemaudit, has been adapted and is now available for criminal use, according to security analysts. Intelligence agencies are bracing themselves for whatever comes next.

Robust cyber security will have to be a central part of the State’s infrastructure, particularly in light of the number of major multinationals headquartered here, and the Government’s drive to lure more from London after Brexit.

For one, insurer and asset manager Standard Life this week indicated it is likely to choose Dublin as the base for its European Union subsidiary after Britain leaves the bloc.

The company’s chairman, Gerry Grimstone, said the firm “can’t take a chance” on Brexit ahead of its £11 billion merger with Aberdeen Asset Management. The most likely scenario – and the one we are now working towards – is using our Dublin-based operation to continue to support our European customers and clients,” he said.

Meanwhile, JP Morgan is to acquire a 130,000sq ft building in the heart of Dublin’s docklands in a move that will provide the US investment bank with the capacity to double its Irish workforce to 1,000.

The company will pay about €125 million for the building, or about €961 per square foot.

With many companies out there still unprepared for Brexit, InterTradeIreland launched a new dedicated resource aimed at helping SMEs

“We are excited to welcome JP Morgan, through its acquisition of 200 Capital Dock, as the first major office occupier to commit to this best-in-class mixed-use campus development, to grow its existing business and meet its long-term plans in Ireland,” said chairman William McMorrow.

With many companies out there still unprepared for Brexit, InterTradeIreland launched a new dedicated resource aimed at helping SMEs deal with the challenges.

The initiative, called Brexit Advisory Service, will offer businesses a number of supports including vouchers valued at €1,000 allowing them to fund specialist advice, free briefing events, information on currency hedging and an interactive information tool explaining the technical language related to Brexit.

Separately, the consequences of Brexit have continued to reveal themselves, with client companies of Enterprise Ireland reporting a major slowdown in the growth of exports to the UK.

The State agency responsible for helping Irish companies access international markets said export growth to the UK had slowed from 12 per cent in 2015 to 2 per cent last year.

That said, the Republic’s monthly trade surplus – the value of exports over imports – breached €5 billion for the first time in March, new figures showed.

The stronger-than-expected performance was driven by exports of medical devices and pharmaceutical products, which increased by €720 million, or 30 per cent, to €3 billion.

The spiralling property crisis continued unabated, with figures compiled by Davy Stockbrokers, based on the residential property price index, showing house prices rose 0.9 per cent in the first three months of the year. That was the strongest first-quarter gain since 2007.

Pierre Moscovici, European commissioner for economic and financial affairs, said Brussels was closely monitoring the situation and will examine the issues as part of the commission’s post-bailout surveillance mission.

Moody’s, meanwhile, downplayed the risk of another Irish housing bubble, suggesting the level of credit growth accompanying the current upturn in house prices was not enough to warrant concern.

A big part of the problem of rising prices is the lack of supply. However, one possible development coming down the tracks could be on the site of RTÉ’s Montrose campus.

Five leading local property groups are to battle it out for the 8.64 acres of land. Cairn Homes, Joe O’Reilly’s Chartered Land, Cork developer Michael O’Flynn (backed by Avenue Capital from the US), Richard Barrett’s Bartra Capital, and little-known developer Bridgedale submitted bids by the May 11th deadline for first-round offers. The next bids are due by June 8th.

Cairn is considered the front-runner after it raised €52 million this week from a placing of new shares with institutional investors. The company’s chief executive Michael Stanley said his company would only be interested in developing apartments. He reckons the site could accommodate between 400 and 500 apartments and 10-15 houses.

The Government’s planned sale of AIB shares hit something of a snag on Thursday as the retirement of Enda Kenny and imminent exit of Michael Noonan from the stage seemingly distracted TDs in the Dáil.

Noonan had said he was ready to press the start button as early as next week, but the house voted to suspend the sale when nobody on the Government side indicated a preference in the vote.

After the vote, a spokesman for the Department of Finance said: “The Minister’s intention remains to sell a 25 per cent stake in AIB by way of an IPO, subject to market conditions.” All very confusing, but it seems the vote will just be ignored and the sale will go ahead.

Separately, Bank of Ireland appointed Francesca McDonagh (42) as its new chief executive. She will take up the role in October and succeed Richie Boucher who steps down later this year. McDonagh is the bank’s first female chief.

A graduate of Oxford university, she joins from HSBC, where she is head of retail banking and wealth management for the UK and Europe.

1 How much state pension will I get next year?
2 Oxford Covid vaccine trials offer hope for elderly
3 Mortgage drawdowns fall by almost a third
4 Where is the creative, effective advertising for face masks?
5 Ulster Bank to introduce new card payment controls on app
6 Hurrah for the companies giving staff more time off
7 Irish house prices could buck European trend and fall this year, says S&P
8 Stoneweg to develop 397-unit co-living scheme on Cork St
9 All you need to know in the Max Schrems-Facebook case
10 Sustainable investment: How your pension can help tackle climate change
Real news has value SUBSCRIBE