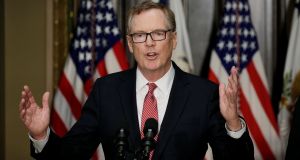 US trade representative Robert Lighthizer: hopes to complete negotiations by the end of 2017. Photograph: Reuters

The Trump administration on Thursday set the clock ticking towards a mid-August start of renegotiations of the North American Free Trade Agreement with Canada and Mexico to try to win better terms for American workers and manufacturers.

With a letter to American lawmakers, US trade representative Robert Lighthizer said he triggered a 90-day consultation period with Congress, industries and the American public that would allow talks over one of the world’s biggest trading blocs to begin by August 16th.

Renegotiation of Nafta was a key campaign promise of American president Donald Trump, who frequently said the 23-year-old trade pact was a “disaster” that has drained US factories and well-paid manufacturing jobs to Mexico.

Lighthizer told reporters Nafta has been successful for American agriculture, investment services and the energy sector, but not for manufacturing

Trump has pledged to use the Nafta talks to shrink goods trade deficits that stood at $63 billion (€56.5 billion) with Mexico and $11 billion with Canada last year, according to US census bureau data.

Lighthizer told reporters Nafta has been successful for American agriculture, investment services and the energy sector, but not for manufacturing. He added that he hopes to complete negotiations by the end of 2017.

“As a starting point for negotiations, we should build on what has worked in Nafta and change and improve what has not,” Lighthizer said in a conference call with reporters. “If renegotiations result in a fairer deal for American workers there is value in making the transition to a modernised Nafta as seamless as possible.”

The Obama administration attempted to address many of these deficiencies in the 2015 Trans-Pacific Partnership trade deal, which included Canada and Mexico, but Trump pulled out of TPP in one of his first official acts as president.

Canada and Mexico both welcomed the American move to launch a Nafta revamp.

Mexican foreign minister Luis Videgaray, speaking at a news conference with secretary of state Rex Tillerson in Washington, said the trade pact needed to be updated after nearly 25 years.

“The world has changed, we’ve learned a lot and we can make it better,” he said.

US Chamber of Commerce president Thomas Donohue urged US officials to “do no harm” to businesses that depend on trade with Canada and Mexico and to move quickly on a new trilateral deal.

As the administration took its first formal step towards Nafta renegotiations, the US Commerce Department launched an investigation on Thursday into Boeing’s anti-dumping claims against Canadian rival Bombardier’s new CSeries jetliners, drawing a threat from Canada to review a deal to buy Boeing fighter jets.

Lighthizer’s letter is less detailed than a draft sent to lawmakers in March, which listed as objectives tax equality and the ability to re-impose tariffs if Mexican and Canadian imports pose a serious injury threat to US industry.

Late in April Trump had considered a full withdrawal from Nafta, but was persuaded by senior officials in his administration to pursue negotiations instead. Lighthizer said he did not think a new threat to withdraw from Nafta would be necessary.

“As the president has said, we are going to give renegotiation a good strong shot,” Lighthizer told reporters, adding that he believed Canada and Mexico would negotiate in good faith.

Our hope is that we can end up with the structure similar to what we have now. If that should prove to be impossible, then we’ll move in a different direction

He said he hoped to maintain the current trilateral format of Nafta, but noted that many of Nafta’s problems are bilateral issues that need to be worked out with either Mexico or Canada.

“Our hope is that we can end up with the structure similar to what we have now. If that should prove to be impossible, then we’ll move in a different direction.”

Asked if the Nafta talks would seek to resolve trade disputes over imports of Canadian softwood lumber or Mexican sugar, Lighthizer said he hoped those issues would be settled before the Nafta talks begin under separate negotiations being conducted by the US Commerce Department.

A Canadian source close to the lumber negotiations said it was unlikely an agreement could be reached by mid-August, however.

Lighthizer said he will seek public comment on the Nafta process and intends to publish negotiating objectives on or about July 16th.