Labour Party motion proposing to delay the AIB stake sale that was passed by the Dáil in an apparent gaffe due to the distraction of the Fine Gael leadership contest. Sources close to the Government said they would ignore the motion. 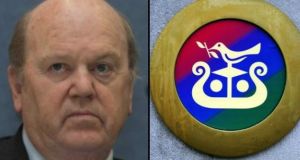 Minister for Finance Michael Noonan is preparing to press the start button on the long-awaited flotation of AIB as early as next week, which would mark his last major decision in office.

Sources said the Government would ignore a Labour Party motion proposing to delay the AIB stake sale that was passed by the Dáil yesterday in an apparent gaffe due to the distraction of the Fine Gael leadership contest.

Mr Noonan, who signalled yesterday that he plans to step down as Minister for Finance when the new taoiseach takes office, is most likely to give the go-ahead for a stock exchange announcement of his plans to float AIB before the next leader of Fine Gael is selected on June 2nd, the sources said. The sale of an initial 25 per cent stake on the stock market, subject to global stock market conditions remaining favourable, could raise between €2.5 billion and €3 billion, according to analysts. It would take about four weeks from the time of the initial public offering (IPO) announcement for AIB’s management and investment banks and stockbroking firms working on the deal to market the transaction to potential investors. While it is the intention of the Government to allow small investors to take part in the IPO, they would need a minimum investment of €10,000 to take part. That would mirror the offer with Aer Lingus when it was floated by the State in 2006 and mark a difference from the 1999 IPO of Telecom Éireann, since renamed Eir, which was more actively marketed to small investors.

During a Dáil vote, nobody on the Government side indicated their preference and the motion was deemed to have passed. Opposition TDs believed that Government TDs were distracted by the internal party leadership challenge.

“Private Members’ motions are not legally binding on the Government,” the department said in a statement. “The Government position remains unchanged. The programme for partnership government clearly allows the Minister to sell up to 25 per cent of Allied Irish Banks up to the end of 2018.”

Fianna Fáil has said it will back the Government as it was going to support the Coalition in the vote anyway. Mr Noonan took office in March 2011 as the country’s banks were in the middle of a round of stress tests ordered by the troika bailout team. The taxpayer bill for bailing out the country’s banks rose to €64 billion after the tests.

A successful sale of a stake in AIB would book-end Mr Noonan’s time as Minister for Finance.