Why we’re ‘taking back Trinity’

Opinion: Hikes in fees are just part of the reason why students are fighting back

Students who occupied a building in Trinity College Dublin have announced an end to the protest that began on Tuesday over the introduction of supplemental fees. 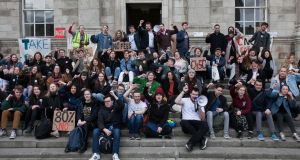 Protests are rarely just about the issue at hand. Usually there is a broader grievance - an accumulation of wrongs, a lack of respect, or an exclusion from power.

In Trinity, all these deeper forces have been at play.

For years, students have faced attritional increases in charges and fees, and staff - both academic and non-academic - have had their pay, conditions, and job security undermined.

Underlying this is the deeply undemocratic structure of college governance, and the autocratic style of the current provost.

As chief executive and as chair of the university board, he holds an absurd concentration of powers.

He has the prerogative to decide when a vote is to take place, and when there is “consensus” - thereby allowing him to overrule dissenters and effectively rule by decree.

And all this has facilitated his agenda to move Trinity towards an American-style model, with students paying high fees and with government support - and intervention kept to a minimum.

That is the context behind the latest decision to impose a new, flat fee of €450 for students who have to take a repeat exam.

High-up officials tried to justify this by saying that the fee allowed them to bring in modular billing, which would allow students to repeat only modules that they failed - and to pay for only those modules - rather than repeating and paying for the whole year.

But the measures only make sense if the university will raise more money from them. What is given with one hand is taken back, many times over, with the other.

Because our voice has been muted, we had no option but to take action.

After a series of long and intense meetings, a highly detailed plan was drawn up. At 8:30 on Tuesday morning, we met at the central bank, sorted into groups, dispersed, and then converged on the dining hall at 10am, with each student instructed to take and secure particular doors. But there was no attempt to stop us by college security.

Instead, they assured us that we could come and go, and many told us, privately, that they supported our action and thought it was time that someone made a stand.

Other academic and non-academic staff were equally supportive. The catering workers even brought us in urns of coffee and tea and boxes of biscuits.

For our part, we made arrangements to pay any non-contract workers whose shifts were cancelled because of our action, and made our peaceful intentions clear to the college authorities.

We put up signs, held a rally, and organised a blockade of two college entrances and of the money-spinning Book of Kells exhibition.

There was an atmosphere of excitement and possibility, heightened by the site of the occupation: the vast, wood-paneled dining hall, lined with immense portraits of old lords and kings, and hung with protest banners.

Various media came to interview us, and we projected the Six One News onto one wall and cheered when our representatives appeared. Later, we held a long meeting to plan further activities and organised a night watch.

The next day, guest speakers held court and students walked in and out to chat politics and discuss strategy. But come five o’clock we received word that the situation had changed.

Security - who had, in sympathy, given us fair warning, and assured us that they were acting on orders - locked down the building.

Access to the toilets was closed, no person or thing was allowed to come inside, and privately contracted security took up positions outside the building.

Other doors inside the complex were sealed and alarmed, and the Students’ Union president was informed that if the doors were opened an armed Garda response unit would be automatically dispatched.

The situation was tense, but we held a quick meeting and developed a plan of action. Phone calls were made to alumni, college officials, and other influential people, and the word went out on social media. Students and others rushed to condemn the move on twitter and facebook, and others gathered outside in protest.

Events escalated quickly and front gate, regent house, and, finally, the exam hall, were occupied in turn. The word came from above and the cordon was loosened. We were given access to toilets, and, after a long conference call, the provost agreed to reopen discussion on our key demands.

Not a final victory, but something to build a campaign on - proof that collective action can succeed.

Moreover, while pressing our demands we retained our friendly relationship with security and the other staff who have shown, and continue to show, so much support for our action. We reaffirm our support for their causes, and for the growing solidarity among all sections of the college community.

We will continue to grow, and to struggle. We will achieve our immediate demands: no repeat fees; no increase in non-EU and postgraduate fees; and a freeze on campus rental rates.

But we won’t stop there, and we emphasise that our demands aren’t simply material.

To paraphrase Walter Benjamin: struggle is for the rough and material things, without which there is nothing fine and spiritual.

Nevertheless these latter things are present as confidence, as courage, as humour, as cunning, as steadfastness in this struggle, and they reach far back into the mists of time.

William Foley is a post-graduate student at Trinity College Dublin