What is the craic? 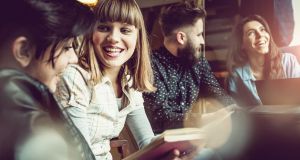 Making friends in Ireland can be difficult but is not impossible. Photograph: iStockphoto/Getty Images

“The craic” is one of the best-known terms in Ireland. Yet, Erasmus program or international students new to Ireland might wonder at its meaning when they first hear it.

‘Crack? What? I’m pretty sure I know what crack is!’

Exchange and Erasmus students, international students will get it – it’s actually pretty hard to have the craic, isn’t it?

When they come to Ireland they’ll find their peers are generally friendly, and will probably get on with them.

Until they realise, by the time they’ve returned to their home country, almost all of their friends ended up being other Erasmus or exchange students. How did that happen?

Because Irish society, or at least student culture, is surprisingly insular. Irish people are known for their hospitality, and any foreign student could tell you they’re friendly, but to actually become friends with a circle of Irish people is a completely different matter.

Ireland’s a small enough place, and compared to its neighbours, its cities and towns are small too. People here grow up in tight-knit communities, and everybody knows everybody else in some way.

A lot of the time someone might have a few circles of friends and, of course, their friends besides. So, when they can’t meet for a night out, no bother- someone else will be available.

That’s why it is easy to sometimes feel socially lost; latching on to one or two Irish people, or a group, to try and get involved only to find it doesn’t necessarily work.

People will see you as one of their many friends or people they know, and sometimes your closeness might put them off, as you may be seen as clingy.

I myself am an international student- but I’ve been visiting Ireland bi-annually all my life, and now that I’ve lived here the past few months I think I understand both sides of the story.

So, foreign students- chill out. Join a lot of societies and make friends, because you will. After a few nights out with the locals the rest comes naturally.

If there’s a period where you just can’t seem to meet with people, try meeting more people instead of putting more effort into meeting with the people you haven’t seen in a while- they’ll get around to you eventually.

Try not to fall into the trap of just associating with other foreign students of your own nationality or exchange program; it can be tempting, but try balancing and even incorporating both.

Local students, as for foreign students... Please, for the love of god, let them in. The biggest problem is that foreign students don’t have friends here. They just came here, completely blank slate, rootless.

A shout-out to NUI Galway students in particular (just because I’m there myself)- they don’t know anyone from the Bish, or the Jez.

It might seem like they’re cool with things, and they probably are, but the chances are that they’re unable to hang out with locals- you and your friends- even though they want to.

Planning a night out? Tell them about it!

If you would like to see the foreign students there, you should be the one to invite them.

Foreign students might not want to come across as rude or intrusive by asking if they can come along. But when they integrate and become part of the group, then they’ll probably become comfortable and step up anyway.

Just try putting yourself in their shoes.

Imagine you move to Sweden to attend university; you have no friends there, you’re not sure of the culture, and maybe you feel a little self-conscious around the locals.

A lot of foreign students outside Europe might not speak English that well, adding another layer of social paralysis. It would be a relief to have someone from the host country reach-out and help you in.

To be fair, it’s not easy to break into any foreign culture. It always takes time. Some exchange students just might not be able to really socially integrate in their relatively short time here.

But there’s a definite miscommunication between Irish students and foreign students just when it comes to connecting and “having the craic”, and both sides would do better at understanding each other if they put themselves in each other’s shoes.

Foreign students, final tip. Greet Irish students on a night out with