Voice of the deaf fighting to be heard 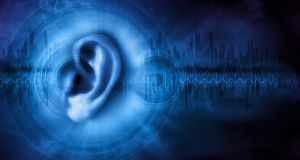 An estimated 600,000 people in Ireland suffer from some form of lack of hearing. Photograph: Getty Images

It’s a blustery morning when I walk into the DeafHear Centre on Frederick St, North Dublin. The not-for-profit charity which has been running for over 50 years, offers a service to people who are deaf or hard of hearing. I’m early for the interview, so I take a seat and wait. While waiting a deaf couple come in, looking for help regarding confusion over their television contract.

Brendan Lennon, the head of information and advocacy at DeafHear, sits them down and through sign language he helps them with questions they have; something they wouldn’t be able to do over the phone with their television service providers. I later find out the couple are one of the 15,000 people DeafHear help yearly, in providing anything from information to equipment.

“Our mission is to support and improve the lives of people with hearing difficulties. To strive towards a point where they would have equal opportunities and equal participation in society, which is something that doesn’t happen at the moment.” Brendan tells me when we take a seat for our interview.

The charity deals with a wide range of ages, from new born babies to the elderly. With 600,000 people in Ireland who suffer from some form of lack of hearing and 1 in 3 people over the age of 60 with a significant or disabling hearing loss (according to The World Health Organisation), services such as DeafHear are in demand.

A main system of communication for many deaf people in Ireland is Irish Sign Language (ISL), but with limited numbers outside the community able to use sign language it can often be difficult for the hard of hearing to be understood in society. That’s why a recent announcement by the HSE that those in need can avail of an Irish Sign Language Interpreter for GP visits has been widely welcomed.

However, one criticism is that the service is only available to people who hold medical cards.

“It creates discrimination within the deaf community, leaving some people left behind while others get a better service,” Brendan says.

With an interpreter costing €50 to a €100, many deaf people choose not to get one for their doctor appointments. Though, as Brendan points out to me, an interpreter wouldn’t just help the deaf person it would also help the doctor involved.

“GP’s often expose themselves to the risk of malpractice when they don’t make sure an interpreter is there for a hard of hearing person’s consultation. If the deaf person doesn’t understand the doctor and ends up taking the wrong dose of medication or whatever the case, it will lead to the doctor being at fault.”

Something else DeafHear feels strongly about is getting residential support services for people who are deaf, something they consider the Government isn’t doing enough about. Often when a deaf person ends up in a residential home because of mental health problems or intellectual disabilities, they get little or no support. They are in a situation where they are already vulnerable and they are put into a place where no one can communicate with them.

“An average stay for a hearing person in a residential home is usually a couple of weeks, while in some cases for deaf people they are in those homes for 11 years because they are getting no help to get better. It’s often the case where these people are disempowered and they can also lose the ability to Sign because they are not using it on a regular basis.”

Government funded DeafHear to the tune of 80 per cent, but like with many cases, cutbacks have left them with just 60 per cent. With the money they do receive, the charity uses it to offer services from their 13 centres around the country. Each centre has a social worker, lip-reading support and sign language classes. But the charity can only do so much, and it’s time for the Government to put more of a focus on this group of vulnerable people in society.

Something that Brendan and many other organisations for the deaf community like The Irish Deaf Society feel would make a big difference, is if ISL was to be recognised as an official language alongside Irish and English.

As a report from the Sunday Independent published in March last year states, “For the deaf community, recognition of ISL would mean more legal rights and better access to public services - including education, healthcare, media and banking. Plus, better employment opportunities and a higher-quality interpreting service.”

In 2014, the Seanad rejected the ISL Bill, though last October, the Minister for Justice and Equality, Frances Fitzgerald, insisted the Government is committed to examining different mechanisms to promote the recognition of ISL. Yet any developments on this is yet to be seen.

To date, 45 countries - including the UK and Northern Ireland - have granted legal status to their own unique sign language.

The Government’s excuse is that by making ISL an official language it would mean every legal act would have to be translated into sign language alongside the English and Irish versions. They consider this to be a waste of resources

But, as Brendan simply puts it, “Unless you have official recognition, things aren’t done.”

It’s clear from the passionate way in which Brendan and others who support the deaf community voice their concerns that more needs to be done by the Government. In all spheres, from equal public services, mental health issues, social isolation and recognition of their language, the voice of the vulnerable needs to be heard.