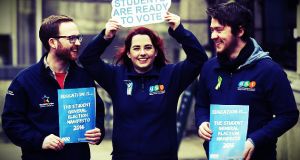 The USI election manifesto includes a call for the abolition of JobBridge, repeal of the 8th amendment and a government strategy on student accommodation.

The Union of Students in Ireland (USI) has placed issues surrounding higher education funding, student accommodation, and repealing the 8th amendment of the Constitution at the top of its agenda ahead of the general election.

The union launched its election manifesto in Dublin on Tuesday in which it outlined key areas of concern it said will have to be addressed by the next government.

Speaking outside Leinster House, USI president Kevin Donoghue said the next Dáil will have the opportunity to introduce "real and lasting change.”

“Austerity has taken its toll on almost every group in society. The impact of harsh and often brutal cuts must be accepted and those responsible must now ensure that it is our most vulnerable who see the fruits of our recovery. In the past two years alone, USI has registered 80,000 new students to vote. USI and students unions will be making sure that young people vote in the next election,” Mr Donoghue said.

USI deputy president Annie Hoey called on the next government to "follow the example" of  Ireland's EU partners and seek to introduce a model of "free, publicly-funded education".

“Education from early years to post-doctorate is not just a right but key to economic growth. As a nation we are particularly reliant on a highly educated workforce for growth. An educated society is a major attraction for foreign direct investment coming into Ireland. A highly skilled and well-educated workforce is a benefit to everyone in Ireland," she said.

Mr Donoghue warned that the introduction of loan schemes schemes had "failed to deliver the promised efficiencies in Australia and the UK".

“USI wants an education system that is free of both financial and societal barriers,” he said

“Failure to adequately invest in education is a failure to invest in society.”

The USI is also calling on the next government to commit to holding a referendum on repealing Article 40.3.3 (the Eighth Amendment) of Bunreacht na hÉireann. It is calling on the next government to repeal the Protection of Life During Pregnancy Act 2013 and replace it with "laws that ensure safe and legal access to abortion, at a minimum, in cases of rape, incest, risk to health or severe and fatal foetal impairment".

The manifesto also focuses on student accommodation and is urging the next Government to create a Student Housing 2020 strategy "to complement" the Construction 2020 strategy.

In the meantime, Nama-owned properties should be used to temporarily address the student accommodation shortfall and the Residential Tenancies Act should be amended to include allow for students’ unions or other representative bodies to have legal standing to challenge the introduction of new rents in student accommodation centres, where those rents are raised outside of term time.

The union is also calling for the abolition of JobBridge, more support for postgraduate students and measures to counter zero-hour contracts.