Precision and artistry on display at impressive NCAD fashion show

Level of craftsmanship, creativity and innovation at event shows potential of graduates

This year’s NCAD annual Fashion show has taken place in the unusual surroundings of the underground car park of the Westbury Hotel Dublin. The show features the work of 32 graduating students. Video: Bryan O'Brien 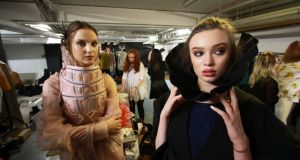 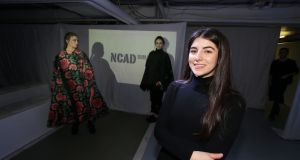 Aideen Gaynor who was announced as winner of the 2016 ‘Designer to watch’ sponsored by Brown Thomas with some of her designs. Photograph: Nick Bradshaw 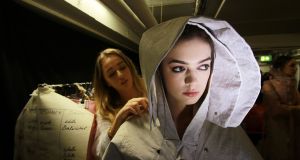 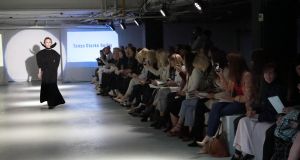 The car park in the Westbury Hotel was the venue for an outstanding NCAD fashion show with thirty two graduates, twice the usual number, showing their creations to universal acclaim.

It was innovative, creative, often emotional and the level of craftsmanship at every level was impressive.

Though the students drew their inspiration from a wide variety of concepts, the outfits were executed with such precision and artistry that more than one retailer commented afterwards that many collections could go straight onto the shop floor.

“This is not just about styling - how things are crafted is the core of this course”, said Linda Byrne, course tutor.

Winner of the €4,000 bursary and mentoring from Brown Thomas was Aideen Gaynor from Marino with a collection of Japanese inspired shapes mixed with Victorian corsetry in quilted black silk, satin and neoprene.

Her handprinted and handstitched floral embellishment drew from the wallpaper designs of Christopher Dresser, a key figure in the 19th century Aesthetic Movement and one coat was composed of fourteen metres of printed fabric.

The daughter of scenic designer Neville Gaynor, Aideen did internships with Simone and John Rocha during her student years and more recently fashioned corsets for the extras on the TV series Penny Dreadful.

“Making is my favourite occupation”, she said.

There was special mention of runner up Nino Sanaia whose handsome collection reworked elements of military style dress in novel and elegant ways much like the sophisticated tailoring based on hunting attire from J J Donnelly.

In third and fourth place were Ailbhe Griffin and Petra Sprenger both of whom mixed feminine materials like tulle and woven ribbon with graphic motifs and intricate plaiting imaginatively.

In an exceptional year, these Irish fashion students, too many to mention, with many fine collections certainly proved that they can master that fine balance between freewheeling creativity and commercial appeal.