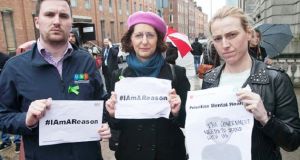 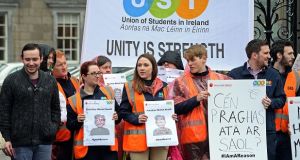 Orchestrated protests were held in Dublin and Galway during Thursday afternoon to highlight the need to preserve the entire mental health budget of €35 million amid attempts to divert one-third of this funding towards other areas in the HSE. Photograph: Eric Luke/The Irish Times 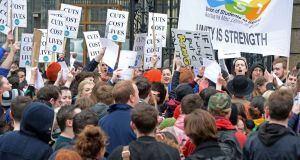 My name is Evie Alkin, and I'm a 25 year-old post-graduate student of Psychology in Trinity College. I eventually hope to become a clinical psychologist.

From the perspective of a psychology student, I firmly believe that Ireland has been making steady progress in removing the stigma surrounding mental health issues. However, I was taken aback to find there was room to cut the mental health service budget.

Many of the issues patients are facing come down to understaffing - there are not enough people in place to provide critical care. Highly qualified professionals are working unpaid, yet the government appear to be taking steps back from rectifying this. There is a clear and urgent need to continue improving services until patients receive a satisfactory level of care. There is little distinction between the services and those who provide them.

I wrote an open letter on the matter to Minister for Health Leo Varadkar. As of yet, I have not received a reply from Mr Varadkar or a representative. I am optimistic that the voices of both patients and carers will be heard.

Every day more people are ‘coming out’ as living with depression, losing a brother to suicide, or suffering panic attacks. I’m proud of my peers for decisively removing the stigma surrounding mental health issues.
I bullishly imagined that this growing movement to ‘mind ourselves’ would be reflected by governmental support. There is a dire need to improve and add services to help mental health sufferers. It is not good enough to be stuck on a waiting list. Suicide doesn’t wait.
I was recently told a story which struck me at how bad things have gotten. A suicidal woman visited her GP looking for help she clearly needed. When faced with the option of joining an over-extended waiting list, to avail of over-burdened and ill-endowed mental health services, it seemed like a better option to take an overdose. This, at least, would result in immediate hospitalization and care.
We are told that prevention is better than cure, but it appears that attempting suicide is the most efficient way to prevent suicide.

After three years in the workforce, I made the decision to return to college and pursue a graduate degree in Psychology. Although my friends and family were extremely supportive of the decision to leave a well paying job and return to college as an adult, there was one comment that kept coming up:
“If you’re going back to college, would you not study Medicine or Law? At least you'll make sure there's a job at the end of it”.
Do you see what this implies? There are no jobs in Psychology. Which is funny, because there is plenty of supply, and plenty of demand.
Believe it or not Leo, denying the validity of someone’s mental health problems does not make them go away, it makes them worse. Anyone who has ever had trouble falling asleep, even for just one night, will be familiar with counting down the hours ‘til morning and realising if you fall asleep now, you’ll only get 5 hours sleep… 4 hours sleep… 3 hours sleep and so on.
The patterns of depressive thoughts, anxious thoughts, suicidal ideation, and negative self image are much like that. The longer they continue, the more desperate they become.


Mr Varadkar, this is a huge step back for Ireland, for this generation, and for future generations.
Why have you done this?