New Irish authors to watch out for in 2020 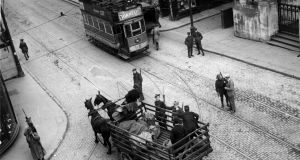 The Irish rebel song Come Out Ye Black And Tans topped the iTunes charts in the UK and Ireland on Thursday. Photograph: Walshe/Getty Images

New Irish authors to watch out for in 2020: It’s shaping up to be a strong year for new writing. Read more here.

Breaking the deadlock over an Irish Language Act: Fourteen years after the signing of the St Andrews Agreement in which the British government agreed to introduce an Irish Language Act (ILA) the issues surrounding this proposed piece of legislation continue to divide opinion. Read more here.

Is the Green movement now the political mainstream? As public transport fans, Greens across Europe have learned the hard way that success is like buses: nothing for ages, then two at once. And this has been one of those successful weeks, one many European Greens have been waiting for longer than a bus on a rainy Dublin evening. Read more here.

1917 review: A thoughtful war movie for Generation PlayStation: As the centenary recedes, it becomes clear that film-makers – and novelists and poets and songwriters – can no longer count on mere mention of the first World War to trigger emotion. Read more here.

John Hinde’s Ireland revisited and re-created: John Hinde was a pioneer of colour photography and one of the most successful and prolific postcard publishers in the world. Read more here.

Hillary Clinton appointed chancellor of Queen’s: The former US first lady, secretary of state and senator, who has been a regular visitor to Northern Ireland going back to the first visit of President Bill Clinton in 1995, becomes the university’s first female chancellor. Read more here.