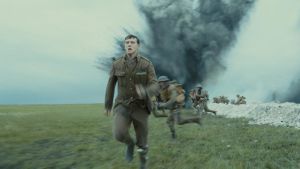 As the centenary recedes, it becomes clear that film-makers – and novelists and poets and songwriters – can no longer count on mere mention of the first World War to trigger emotion.

Artists in western Europe (it’s different in Russia) have always been less gung-ho in their treatment of the Great War than of the conflict that followed. Virtually every film is an act of commemoration.

There is a fair deal of that in Sam Mendes’s propulsive new drama. Dedicated to his grandfather, a survivor of the Western Front, 1917 is soaked in sombre atmospheres and mournful hues. Thomas Newman’s score moves from electronic throb to neoclassical requiem. The conversation is of loss and disillusion. Yet the film is more at home to naked sensation than would once have been deemed appropriate for such a project.

Mendes has made the brave – or something else – decision to shoot the entire drama in what looks like one continuous shot. This may lend more immediacy to proceedings, but it’s hard to argue it makes the film any more realistic (if that matters).

Indeed, the necessity to follow characters all the way from one incident to the next has generated a great deal of storytelling, philosophising and other chatter that rarely emerges from ordinary lips. After all, Mendes can’t expect us to watch soldiers strolling in silence for 20 minutes.

No matter. The film is a genre entertainment and, like all such beasts, it honours certain conventions and allows certain compromises. Taking more than a few cues from Peter Weir’s Gallipoli (another first World War film that combined eulogy with rampaging tension), 1917 sends Lance Corporal William Schofield across no man’s land with a message to call off a suicidal attack.

Back then it was the still-fresh Mel Gibson. This time, George MacKay strains and frets as a man who, hammered into cynicism, grasps one late chance to do something worthwhile. His drooped, damaged features do more to convey the mounting terror than any amount of nervy dialogue.

There are horrors here. Shortly after leaping the barbed wire, George inadvertently dips his hand in a rotting face. But there is nothing to equal the traumas of Elem Klimov’s Come and See or, released exactly a century ago, Abel Gance’s J’Accuse. The teeth, though blackened, are never so horrifying as those in Peter Jackson’s recent documentary They Shall not Grow old.

Mendes allows in just enough reality to remind us that genuine antique terrors inspire the mounting excitement. And those thrills are not in short supply. He and his veteran cinematographer, Roger Deakins, knit long takes into one apparently seamless rush of breathless incident. (You could reasonably argue that there is one deliberate cut halfway through, but let’s not quibble.)

We get a one-take film every few years and, though purists may balk, the novelty of scrutinising the magic trick to see how it is achieved alone justifies the ticket price. Those mysteries being that bit less perplexing in the digital age, one finds oneself comparing the techniques to the visuals in a video game such as Call of Duty. No disrespect is meant. Cinema fed into games and that influence is now being sluiced back towards the older medium.

Mendes’s film is, for all the long glances over its left shoulder, very much of the 21st century. Deakins uses the full digital toolbox. Mendes casts people of colour in a conscious effort to reflect the society in which the film emerges. The pace really will keep PlayStation fans happy (and why not?).

The result is a slice of prestige British film-making that nimbly avoids accusations of heritage cosiness. Distinguished actors turn up in smallish parts throughout – Andrew Scott, Colin Firth, Benedict Cumberbatch – but each has a worthwhile contribution to make.

The script by the director and Krysty Wilson-Cairns admits no puffing about patriotic sacrifice. It ends with emotional release and a beautifully neat closing of the circle.

Leaner than Lean, but fit to sit in his company.