Leaving Cert 2020: ‘The finish line has suddenly been moved’ 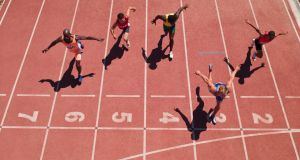 Up until Friday, the finish line for this particular marathon was in sight. Photograph: Getty

Despite frequent references to the CAO points race, the Leaving Cert could be more accurately likened to a marathon.

As a member of the class of 2020 the Coronavirus outbreak meant I was under no doubt that we were facing into an obstacle ridden course this year, one that would be burdened by ambiguity and unease.

Up until Friday, the finish line was in sight and the call to turn over our papers in the first exam was finally within touching distance.

Today, I am still a participant in the race, only now and for the first time in the history of the Leaving Cert, the finish line has been moved.

When my fellow sixth years and I were called together and given the news of the immediate closure of all schools last month, we recognised that big changes were likely.

However, that afternoon, while we wrestled the contents of our lockers into our school bags, we had no idea that our final hours of secondary school as we knew it, had reached their conclusion.

For close to a month Leaving Cert students from all parts of the country have sought clarity. The answer arrived on Friday in the form of an announcement from Minister for Education Joe McHugh. Considering the fervour with which students had demanded a response, it was almost humorous how many immediately denounced the news that the Leaving Cert would now take place in late July and early August.

We can debate and dissect this issue for weeks if we wish - and I am sure some will - but there was never going to be a solution that suited every single student. In this unprecedented situation it was not about finding the best solution. Instead, in a turn of events that none of us could have predicted back in September, it was about identifying the least terrible route in a set of circumstances that has turned our world on its head.

Now is not the time for vilification. We have found ourselves in an exceptional position and Minister McHugh’s announcement means that our situation has become that bit more unique. But it is far too simple to play the blame game. In a situation that is anything but straightforward, it is dangerously easy to start assigning accountability and blame.

Regardless of the reaction, expletive laden tweets and belligerent social media campaigns will do little to help our ill-fated situation.

Along with many of my friends I can understand some of the frustration. With the warmer weather sure to be creeping into the rooms where we have banished ourselves to in order to revise, and the lasting effects of Covid-19 still set to be lingering, it will be a far cry from the summer I hoped for.

The coronavirus has forced people worldwide into situations they would never have chosen to be in. A prolonged sixth year would at no point, have been my first choice but for the moment, it is the position I find myself in and the one I must face.

The decision has divided students, teachers and commentators alike. As the news reached us on Good Friday there was very little that we were all in agreement over.

I will admit that I fear the current state of affairs will widen the divide between those with an abundance of opportunities and those for whom they are limited. Some students concluded that predicted grades were the best option, but the feasibility of this option is in question. Others insisted mock results would be an accurate measure but the “helping hands” students have access to for these, negates this option rather hastily.

Yet, one thing that was unanimous among the sixth years I spoke to, was that while this situation is far from ideal and while it is perfectly acceptable to feel discouraged and upset, it is an impediment that we will confront together.

The marathon we are running has been extended but dragging our heels will do more harm than good.

For me and almost 60,000 other students, moving on will be the real challenge. However, we are still progressing and, in a situation, where our lives have to a greater extent been put on hold, this should not to be dismissed.

As Leaving Cert students we measure our lives in a series of numbers and figures: the points required for our dream courses, percentages on revision tests and the quantity of caffeine charged drinks we consume.

With the Government’s announcement we can add another item to this rather gloomy list - the two extra months added to the countdown until the first paper.

There is no doubt that those additional two months will be difficult. For the first time, I find myself selfishly hoping for a miserable summer forecast!

There are no winners in this particular marathon and the knowledge that the 2020 Leaving Cert will go down in history is quite frankly a woeful participation medal.

However, the strength my fellow sixth years have displayed in recent days ensures me that we are still contenders and are just taking a different route.

Digging out my school blouse and skirt in late July is not an appealing prospect. However, if it means protecting my loved ones then I will do so without hesitation.