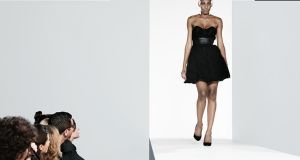 The potential of Ireland’s fashion industry is not being capitalised on due to a combination of “lazy retailers” and college courses that focus too strongly on fashion concepts,  a leading figure in the Irish fashion industry has said.

Recently published Eurostat figures show that EU Member States exported clothes and footwear worth €141.8 billion in 2017, the majority of which went to other EU Member States.

Eddie Shanahan, chairperson of the Council of Irish Fashion Designers and one of Ireland’s foremost fashion consultants told DCU Newsday that many talented young designers go abroad to countries like Italy and Poland as a result of a lack of purposeful manufacturing structures.

He criticised Government enterprise programmes for placing too much emphasis on supporting and developing low-price products, adding the programmes must be “adjusted”.

“State agencies do not understand fashion. They say it’s a fickle industry yet the figures show it is a massive industry that employs thousands of people,” said Mr Shanahan.

Maintaining that the majority of current fashion design courses are inadequate in dealing with the commercial aspect of fashion, Mr Shanahan argued that heavy academic slants on conceptualisation are detrimental to export potential.

“Fashion designers need to start thinking like manufacturers and move away from the conceptual into the commercial,” he said.

Ireland’s comparatively small market size and lack of large-scale manufacturers holds the native fashion industry back. Mr Shanahan likened the size of the Irish market to that of Manchester’s. “If you look at the home market, it’s worth about €3 billion a year and €2.5 billion of that is imported. That defines the problem,” he added.

Mr Shanahan also said that Irish high-street retailers are noticeably “lazy” in their response to Irish designers and that discounts seem to be their only promotional tool. This encourages sales volumes, he says, but leads to value shortfalls.

“Since the recession, consumers have begun looking for a point-in-difference and have started to become a bit exhausted with a homogenous high street full of identical fashion products.”

Ireland is missing a “dedicated fashion fair”, Mr Shanahan says, but admits that the limited market size dictates such an endeavour to be “almost impossible”.

Eurostat consumption expenditure figures from 2016 showed that Irish households spend 3.9 per cent on clothing and footwear, compared to the EU average of 4.9 per cent.