How far have we come with youth politics?

The College View: Within the last two years alone, the political voice of this generation’s youth has grown from a gentle breeze to a roaring wave in a sea of voices. 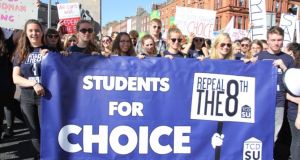 Photograph: Courtesy of The College View/Repeal the 8th

It seems as if many of the recent referendums and elections have been turned into a generational battle.
Take Brexit for example. When Britain was preparing for the referendum to leave the European Union this Summer, it was clear that the competitive enemy for the Leave campaigners were students and young professionals. Boris Johnson, a key political supporter of the Leave campaign addressed youths directly in his victory speech.
“I want to speak directly to the millions of people who did not vote for this outcome, especially young people, who may feel that this decision involves somehow pulling up the drawbridge, because I think the very opposite is true’.
More recently this month in the USA, 55pc of 18-29 year olds, voted for Hilary Clinton  to no one’s surprise. Popular icons among those age groups included Kendall Jenner, Katy Perry and Lady Gaga who showcased their support through social media using the hashtag ‘#I’mwithher’.
If you checked your newsfeed daily and it was filled with memes, jokes, ‘#I’mwithher’ and ‘news articles’ with numerous claims  of sexism from Donald Trump, you too would be surprised at his victory. However, if you paid attention to polls, un-biased coverage and policies, you may not be.
When Trump blamed Clinton for the North American Free Trade Agreement (NAFTA), the younger generation picked up on the ridiculousness of it all. NAFTA was an agreement voted in 61-38 by the Senate back in 1993. It would be unfair to blame just one person, yet alone that person’s wife, for the catastrophe it was.
To read the rest of this story please follow this link: http://www.thecollegeview.com/2016/11/30/far-come-youth-politics/