Former tánaiste Mary Harney and Joan Freeman among other recipients 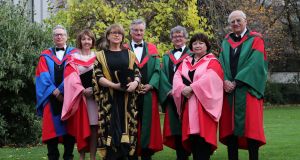 It was the first ceremony conducted by the university’s newly-elected chancellor, former president of Ireland, Prof Mary McAleese.

Mr O’Toole, who has been a columnist with the Irish Times for more than 30 years, was awarded a doctor in letters.

“In his essay on Freedom of the Press, George Orwell memorably wrote: ‘If liberty means anything at all, it means the right to tell people what they do not want to hear.’

“We cannot but recall these words as we welcome Fintan O’Toole, proud Dubliner, uncompromising observer of Irish political, social and cultural life, and worthy recipient of the Orwell prize for journalism in 2017,” she said.

Ms Harney, a former government minister for trade and health and the longest-ever serving female TD, was praised for her contribution to public life.

Prof Chaoud said: “This woman has been a strenuous reformer, capable of effecting long-lasting improvements to environmental policies, to employment and entrepreneurship, and, most notably, to the medical profession and the health service in Ireland.”

Mr Harney is a former student of Trinity and was the first first female auditor of the College Historical Society. She is currently chancellor of University of Limerick.