Your guide to the weekend’s best sporting action 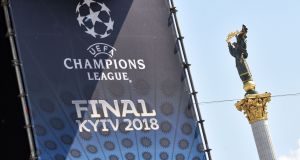 Liverpool will look to claim their sixth star with a win over Real Madrid in Saturday night’s Champions League final. Before that, Leinster aim to complete the double in the Pro14 final against Scarlets.

Rory McIlroy is in a commanding position after his second round 65 left him 12 under par at the BMW PGA Championship on Friday. Sky Sports Golf’s live coverage at Wentworth goes until 6pm, with Shane Lowry, Paul Dunne, Graeme McDowell and Padraig Harrington all also in action.

It’s the final weekend of the Giro d’Italia and Friday’s stage 19 to Bardonecchia, is the hardest yet. Overall leader Simon Yates conceded 28 seconds on Thursday while Irish riders Ryan Mullen (Trek-Segafredo) and Sam Bennett (Bora-hansgrohe) are 93rd and 158th respectively (Eurosport 1, noon-4.45pm).

Séamus Power, the lone Irishman on the course, is three over par after his first round at the Fort Worth Invitational. The second round is on Sky Sports Golf from 6pm to midnight.

There are also two under-20 Ulster football quarter-finals, with Tyrone hosting Monaghan at Healy Park at 8pm. As well as three matches in the Munster minor hurling championship including Laois v Kilkenny in Portlaoise at 7pm.

There’s horse racing at the Curragh this weekend, and Saturday’s big one is the Tattersalls 2000 Guineas, and that’s live on RTÉ 2 (2pm-5pm). Elarqam is a marginal 9-4 favourite over Gustav Klimt at 3-1.

In a big day of soccer action Aston Villa take on Fulham in the Championship play-off final. Irish trio Conor Hourihane, Scott Hogan and Glenn Whelan will all be hoping to secure their place in next season’s Premiership with a Villa win - that’s on Sky Sports Main Event from 4pm with a 5pm kick-off.

From 5.25pm on TG4 (or on Sky Sports Action from 5.30pm) coverage of Leinster’s Pro14 final against Scarlets will be underway. The Irish province are hoping to add the Pro14 to their Champions Cup title, against the reigning champions at the Aviva. So far over 40,000 tickets have been sold for the 6pm kick-off, and they are still available on ticketmaster.

Following that, Jurgen Klopp’s Liverpool team take on Real Madrid in the Champions League final, live from Kiev on RTÉ 2 from 7pm. Kick-off is at 7.45pm as the La Liga side go in pursuit of a third European title in a row, against the competition’s highest scorers.

The Ulster championship meeting of Down and Antrim is live on the BBC iPlayer from Pairc Esler (7pm kick-off), while elsewhere Roscommon travel to Carrick to take on Leitrim with a place in the Connacht final up for grabs. That’s underway at 5.30pm. The Cork and Tipperary footballers meet at Semple Stadium at 7pm, as the Rebels look to put their dismal league campaign behind them and book their place in the Munster decider.

Lewis Hamilton will hope to extend his 17-point championship lead heading into the sixth round of the Formula One season, although Mercedes have struggled at the slow-speed Monte Carlo street circuit in recent years (Sky Sports F1 from 12.30pm).

Aidan O’Brien’s filly Happily dominates the top of Sunday’s 1,000 Guineas betting on the back of her third to Billesdon Brook at Newmarket earlier this month. Sunday’s racing from the Curragh is live on RTE 1, from 1.40pm-4.35pm.

The final round of the BMW PGA Championship is on Sky Sports Golf from 11.30am to 6pm, while Eurosport 1 (2.30pm-6.15pm) will have live coverage of the Giro d’Italia final stage from Rome.

Sunday is a busy day on the GAA front, with the two televised (RTÉ) live games being Tipperary v Cork in the Munster hurling round-robin (2pm), and Galway v Kilkenny in the Leinster equivalent at 4pm.

Clare host Waterford in the day’s other Munster round-robin clash. There are three Leinster football quarter-finals including Dublin v Wicklow at O’Moore Park (4pm). Donegal will hope to build on their win over Cavan in the Ulster quarter-final against Derry (Celtic Park, 4pm). The Sunday Game is live on RTÉ 2 from 9.30pm with all the weekend’s highlights.