Celebrations of France's World Cup semi-final win against Belgium turned rowdy, as fans on the Champs Elysees in Paris threw street furniture at police who fired teargas to clear the avenue. Video: Reuters 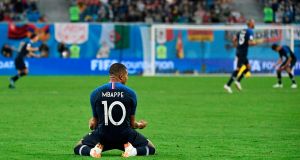 When the final whistle came, the sheer joy of the celebrations came as a surprise. Kylian Mbappé was face down on the ground, Hugo Lloris racing up the pitch, Didier Deschamps in a circle with his staff, jumping up and down in celebrations. France had ground down and snuffed out Belgium with the remorseless steeliness of terminators but they celebrated like little boys.

They are back in the World Cup final again, 12 years after losing on penalties to Italy, and on Sunday they will have the chance to confirm their status as the dominant international football power of the last 20 years.

They are playing a kind of football that will win them respect rather than love, but they were the stronger team, as they have been in all six matches they have played in Russia, and they will start the final as favourites.

It was a game that looked for the first quarter as though it could be a classic, but gradually subsided into something duller and more attritional. Belgium tried to play football, while France focused on mistakes - how to avoid them, and how to punish them.

Between them, these two sides could call upon five or six of the 10 best counter-attacking players in the world. They chose to use these players in different ways. Belgium played on the front foot, seeking to control possession and play in France’s half of the pitch. France were happy, as they have been all tournament, to let Belgium have the ball and play on the counter-attack, sitting back and breaking fast with quick passes to their flyers Antoine Griezmann and, especially, Mbappé.

Mbappé is the difference between this France team and the one that blew it in the final of Euro 2016. That night against Portugal, the player on the right of the French attack was Moussa Sissoko. He was actually one of their better performers on the night, but it’s not fair to compare Sissoko, who is just a decent player, and Mbappé, who is a once-in-a-generation talent. Mbappé can destroy defenders in more ways than any other footballer on the planet right now - he can dribble past them, spin around them, beat them for pace over five yards or over 50, flick it on first time with any part of his foot, he can play a perfectly timed pass to a runner you didn’t think he knew was there. He is capable of destroying the best-organised defences and no opposing side can feel secure knowing he is on the field.

The pity was that more of his compatriots weren’t here to see it. There were only a couple of thousand French and a couple of thousand Belgians - there may have been more Brazilians in the stadium than fans of either of the countries who were actually involved, and there were plenty of empty seats as well.

The result was that the biggest match of the World Cup so far was played out against the backdrop of a low conversational hum. It must have been strange for the players. 14 out of the 22 who started play their club football in England. The noise at Premier League grounds is often oversold, but even the laziest crowds can usually muster at least a couple of songs per half. If this was the biggest match of their lives, why was the atmosphere deader than it would have been for the dullest meaningless end-of-season league match?

The soporific atmosphere seemed to affect the match - what had started as skilful and enthralling high-tempo football became first cagey, and then, by slow degrees boring. This suited France’s patient football more than it did Belgium’s sparky game.

Belgium dominated the first half but the question was always going to be whether their midfield three of Marouane Fellaini, Axel Witsel and Mousa Dembele would have the strength and energy to stay with France’s younger and more dynamic combination of N’golo Kante, Paul Pogba and Blaise Matuidi. In the second half, they lost their grip. Dembele was substituted on 60 minutes, by which time France had scored, Umtiti beating Fellaini to Griezmann’s corner at the near post. The lead secured, France sat back and defended it, while Belgium vainly fired crosses into the centre towards the head of Fellaini. Umtiti and Varane never looked seriously troubled.

France now get to sit back and see which one of England or Croatia they will face in the final. No team looks better equipped to handle England’s threat from set-pieces, and they must also wonder what sort of damage Mbappe and Griezmann might be capable of in the spaces outside England’s back three.

If there is a concern for France, it is that Olivier Giroud seems almost intimidated by how much better his partners in attack are then him, and delivered a largely inept performance. Then there is the argument that 2018 is simply fated to be the year that football comes home. But as they know in France, the Fifa World Cup was dreamed up by a Frenchman, and if it really is on the way home then Paris is ready and waiting.