Scandinavian state registers more than 2,500 cases by Wednesday and 42 fatalities 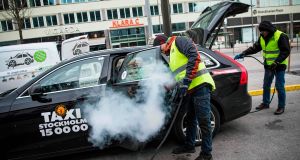 A taxi is cleaned and disinfected in Stockholm, Sweden. Photograph: Getty

While its Nordic neighbours have closed all schools and shops to fight the spread of coronavirus, Sweden’s latest decree in the crisis has been to impose table service-only in restaurants.

Sweden had 2,510 confirmed cases and 42 deaths from Covid-19 by Wednesday, though the real number of infected is likely higher after a shift in testing rules to focus on at-risk groups.

Unlike neighbouring Norway, Denmark and Finland, Sweden’s government has adopted a looser, more voluntary approach to the growing crisis.

Gatherings of up to 500 people are still permitted and only university and higher education have moved teaching online.

Primary schools remain operational as do ski resorts ahead of the looming spring break. Sweden’s Social Democratic government is recommending individual responsibility – suggesting people to limit their movements and self-isolate if they feel ill.

“There will be a few decisive moments in life when you must make sacrifices, not only for your own sake but also to take responsibility for those around you, for your fellow humans and for our country,” said prime minister Stefan Löfven. “That moment is now.”

The last two weeks I’ve stayed inside. When I returned from my trip around Central Europe I isolated myself (in a borrowed apartment away from my mother and sister) since the number of cases of COVID-19 (in Germany for instance) were similar to Italy in the beginning. Around ten days ago I started feeling some symptoms, exactly the same time as my father - who traveled with me from Brussels. I was feeling tired, had shivers, a sore throat and coughed. My dad experienced the same symptoms, but much more intense and with a fever. In Sweden you can not test yourself for COVID-19 unless you’re in need of emergent medical treatment. Everyone feeling ill are told to stay at home and isolate themselves. I have therefore not been tested for COVID-19, but it’s extremely likely that I’ve had it, given the combined symptoms and circumstances. Now I’ve basically recovered, but - AND THIS IS THE BOTTOM LINE: I almost didn’t feel ill. My last cold was much worse than this! Had it not been for someone else having the virus simultainously I might not even have suspected anything. Then I would just have thought I was feeling unusually tired with a bit of a cough. And this it what makes it so much more dangerous. Many (especially young people) might not notice any symptoms at all, or very mild symptoms. Then they don’t know they have the virus and can pass it on to people in risk groups. We who don’t belong to a risk group have an enormous responsibility, our actions can be the difference between life and death for many others. Please keep that in mind, follow the advice from experts and your local authorities and #StayAtHome to slow the spread of the virus. And remember to always take care of each other and help those in need. #COVID #flattenthecurve

So far Stockholm has resisted more stringent measures such as physical distancing rules or closure of non-essential shops, bars and restaurants. On Wednesday welfare minister Lena Hallengren apologised for the disruption likely to be caused by a new decree imposing table service-only in restaurants.

“We are aware this will impact on many businesses and employees, but the situation is serious and this will limit contagion,” she said.

Anders Tegnell, Swedish chief epidemiologist, has insisted the country’s measures are a reasonable approach towards an infection that is “here to stay”.

“What we are working on is trying to bring the infection in society down as much as possible, “ he said, “to flatten the curve and create a situation for healthcare services to continue to function”.

However this approach has sparked alarm among some virologists, who accuse the Swedish government of following an approach since abandoned by the UK government.

A leading mathematician who modelled the spread of the virus – focused around major cities like Stockholm and Malmö – has described the government’s approach as “a mad experiment with 10 million people”.

Joining the critical chorus, the leading Dagens Nyheter daily has accused the government of taking a “gamble” with the health of the population. “We cannot allow the human desperation in Wuhan and Bergamo to be repeated in Sweden,” it wrote in an editorial.

Climate-change activist Greta Thunberg has said she and her father have most likely had the virus. In an Instagram post she said they fell ill after a trip around central Europe, self-isolated for two weeks and urged her followers to do the same if they have symptoms.

“I almost didn’t feel ill, my last cold was worse than this . . . and this is what makes it so dangerous,” she said. “We who don’t belong to a risk group have an enormous responsibility; our actions can be the difference between life and death.”