Thomas Bach: ‘We’ll organise a Games only in a safe environment for all participants’ 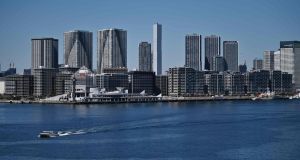 Hundreds of luxury apartments overlooking Tokyo Bay that were due to be converted into the Athletes’ Village have already been sold. Photograph: Getty Images)

A cherry blossom Olympics without an Athletes’ Village? Some scale-back on the 42 venues and possibly even the 33 sports?

They may still be the Tokyo 2020 Olympics in name and number, but could look and feel decidedly different when – or indeed if – they do go ahead before the end of the summer of 2021.

The “if” is certainly still there: in a media teleconference on Wednesday, Thomas Bach, the president of the International Olympic Committee (IOC), addressed the immediate and long-term implications of the decision to postpone the 2020 Games into 2021, and reiterated the fact they weren’t looking beyond that summer.

“The agreement is that we want to organise these Olympics at the latest by the summer of 2021,” said Bach, gently pressing the fact the unprecedented situation of postponing the summer Games into 2021 would need “sacrifice and compromise” by all the stakeholders.

First up, Bach explained, was the establishment of a new taskforce by the local organising committee – to be called “Here We Go” – with a view to establishing those new dates, looking not just at the summer months of 2021, but possibly the spring months.

Indeed it may in their best interest to postpone as long as possible: around the same time on Wednesday, coincidentally or otherwise, Tokyo governor Yuriko Koike requested that people refrain from going outside this weekend for nonessential reasons, due to concerns over a sharp rise in the number of coronavirus infections in the Japanese capital. The metropolitan government confirmed 41 cases the same day, more than double its previous daily record of 17 on Tuesday.

When asked what if the Covid-19 pandemic is still an issue come next year, Bach said: “We have established the principle, we want and will organise a Games only in a safe environment for all the participants.”

On the immediate and “very challenging question” of pushing the Games into 2021, he said: “This is a like a huge jigsaw puzzle, putting together, and every piece has to fit. If you take out one piece, the whole puzzle is destroyed.

“Therefore everything has to come together, everything is important, and this is why I really do not envy the members of this taskforce in their work, but having seen the proof of the professionalism and dedication of the organising committee, to make Tokyo the best prepared Olympics ever, and knowing about the professionalism of our co-ordination commission and Olympic Games department, I am also confident we can master this first ever challenge.

“The Games have never been postponed before, we have no blueprint, nevertheless we are confident we can put this beautiful jigsaw together, and in the end have a wonderful Olympic Games.”

While Bach insisted there were no regrets about either the handling or timeline of the IOC’s decision over the postponement, part of that immediate challenge is the fact hundreds of luxury apartments in the Tokyo Bay area that were due to be converted from the Athletes’ Village have already been sold: touted by developers as a “flagship neighbourhood for urban lifestyles”, the buildings housing the 11,000 competitors were to be hastily repurposed into more than 4,000 condos with city views, some carrying a price tag of 170 million yen (€1.4 million).

The site comprises 23 tower blocks capable of housing up to 12,000 people, as “the city complex where everything begins” with views of the ocean, and buyers were expecting to move in next March.

Bach was uncertain whether or not that Olympic site could still be used.

“I cannot tell you what the situation is. I am aware of the circumstances we are living in, but of course I would be delighted if we could have an Olympic Village in the traditional form. Because everyone who has once lived in an Olympic Village knows this is the real Olympic experience . . . forming this unique Olympic community.”

Bach was more confident about the sponsorship and endorsement deals already written into the 2020 Games.

“We have contacted in the meantime all the sponsors, and what we can see is that we have their full support for this decision, and we will now work to implement it. These Games are called Tokyo 2020, and for me it’s a logical consequence that the sponsors offered the Tokyo 2020 keep their rights, even if the Games are organised in 2021.”

As well as leasing some of the 42 venues set for 2020, the organising committee also employs 3,500 staff members, some of whom may be temporarily laid off. While local organisers are spending $12.6 billion (€11.6 billion) to put on the Olympics, a national government audit report in December put costs at $28 billion (€25.8 billion), the Japanese financial newspaper Nikkei putting the added cost of postponing at $2.7 billion (€2.5 billion).

The IOC does has a reserve fund of about $2 billion (€1.85 billion), and insurance to cover any major losses. The IOC made $5.7 billion (€5.25 billion) in its last four-year Olympic cycle, which included the 2016 summer Games in Rio de Janeiro and the 2018 winter Games in PyeongChang, South Korea. Of that total, 73 per cent came from broadcast rights and 18 per cent from top-level sponsors.

1 Gerry Thornley: Ireland don’t want to box themselves into a corner
2 Owen Doyle: Ireland suffered from officiating of the breakdown
3 Kevin McStay: Maybe a knockout All-Ireland Championship is the long-term solution?
4 No further players to be called up to Ireland squad to face Georgia
5 Thomas Galligan and Cavan raring to meet Dublin in Croke Park
Real news has value SUBSCRIBE