Helen O’Rahilly: ‘I ran BBC One on the day of the bombs. I’m well versed in panic’

Isolation Diaries: TV executive is running localsupport.ie to get supplies to older and vulnerable people 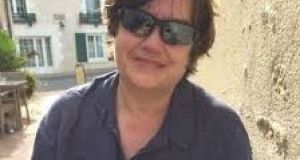 Helen O’Rahilly: ‘It’s such a buzz to help people.... I’m a sarky old cynical bitch most of the time but it’s keeping me going.’

Television executive, producer and journalist Helen O’Rahilly is spending her isolation organising a network of volunteers to deliver necessities to older and immunocompromised people around the country. It’s called localsupport.ie and it is involves O’Rahilly and a bunch of fellow volunteers (she namechecks Jonathan Randall who made their interactive map, and Dave Bolger who created their SMS platform) being on shift several times a day ensuring that people’s needs are being met.

“Someone texts the number and it goes into an email format to myself and five other volunteers, who all have a journalistic background and are doing feck all at home.”

She laughs, “Quote me on that. We find a volunteer nearest them... and give them the name and phone number of person in need of deliveries. I just did one in Skerries for someone who needed medication, and another in Limerick for an elderly person who needed groceries. It’s also for anyone who has been told to isolate because of the virus or a frontline medic working double shifts who needs a delivery or a dog walked.”

Is she stressed by it all? She is not, she says. She’s a television executive who has worked in both RTE and the BBC. “I ran BBC One on 7/7, the day of the bombs” – July 7th, 2005, when 56 people died – “so I’m well versed in panic mode and how to get things done… I’ve had a gun pointed at my head by a member of the mafia in Las Vegas and I didn’t soil myself. I’m a tough old broad.”

O’Rahilly is immunocompromised herself after a dose of bilateral pneumonia a few years ago, and is currently isolated from everyone except her 90-year-old aunt who she helps to look after (she lent her own house rent-free to self-isolating medical staff). Since the pandemic began, she has had to venture into the real world just once to try and sort out a residential parking space, which some unmoveable bureaucrats wouldn’t do online. “I was sitting there with mask and gloves on,” she says and sighs. Apart from this, she says, “good neighbours do the shopping for me.”

She keeps in touch with people by phone, Skype, Facebook and Twitter, which she finds unusually supportive at the moment. She also swears by her favourite comfort food “cheese puffs from M&S” (she later messages me to tell me, that to her horror, she’s accidentally stocked up on the low-fat option which “taste like eating farts”).

She’s not anxious, she says, because she takes “all necessary precautions”. “I go for a walk on the beach in Rush every day and I make sure to do some gardening. And I’m absolutely loving doing this [the volunteering website]. It’s such a buzz to help people.... I’m a sarky old cynical bitch most of the time but it’s keeping me going.”

Brian Deady: ‘My job is not to be famous, it’s to make stuff’