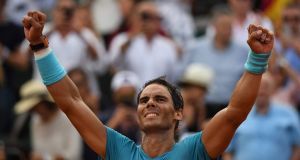 The Roland Garros men’s final and a squadron of jets with red, white and blue smoke trailing behind, rush low above the heads of the people in the Parisian centre court, Court Philippe Chatrier.

Beneath them on la terre battue Rafa Nadal is precisely turning his drink bottles so that the labels face out, adjusts his socks and laces. Touches of Obsessive Compulsive Disorder have always been around the best clay court tennis player that has ever lived.

“Maybe we will have to invent a new word if he wins,” said commentator Mats Wilander. With 10 French Open titles, only Austrian Dominic Thiem stood between Nadal and his 11th.

John McEnroe never won it. Pete Sampras never won it and Roger Federer has won it just once. The clay has a peculiarly demanding nature and Nadal’s obsessive ticks have allowed him dominate on the surface since his first as a 19-year-old in 2005.

Thiem, more the mien of a desk clerk who had forgotten to shave to Nadal’s cruiserweight boxer, looked physically dominated from the outset. As is often the case now when Nadal reaches finals, it is what record will be redesigned if he wins. McEnroe knew just what Thiem had to do.

“He has to ask in his heart of hearts and between the ears can he do it,” said McEnroe, with a note of doubt in his voice

But the answer to the question became clear after an hour and 50 minutes as Nadal went two sets up, his other obsession with bouncing the ball before serve running him into a time violation with the umpire.

“You can’t go away emotionally and tactically. If you do go away you can’t beat this man,” said Wilander as Thiem went 15-40 down in the first game of the third set.

Wilander, who won three French Open titles in the 1980s, knew by then that Nadal doesn’t give up two sets on clay on the last Sunday at Roland Garros to anyone.

That was until the left hand of the champion began to cramp in the third set sending middle-aged men with walkie talkies scrambling around his chair cutting of tape and massaging his forearm. With humidity at 88 per cent, it was the only sliver of hope Nadal allowed his opponent.

“What comes next. Something comes next after the finger. Another body part,” observed Wilander throwing doubt on an outcome that had until then seemed processional.

But the attention Nadal received for what looked like cramp threw up another discussion about the multiple winner bending the rules and doing as he pleases.

It is not allowed to get medical attention for cramp. So maybe it wasn’t cramp and maybe the tablets he was necking down with water were for something else. Then at the post match on court interview afterwards he said it was cramp.

Soon after a double service break for Nadal drew a shriek from a disconsolate Thiem as he lined up with the Spaniard serving for his 11th French Open. At that stage Thiem had clocked up his 40th unforced error.

At 6-4, 6-3 and 5-2 up, even the majestic Nadal had trouble closing it out as Thiem steamed back from 0-40 down to deuce to create a mini-drama at the end. In the commentating box the suggestion was that even Nadal can suffer from nerves.

There was no new word invented for 11 titles. But Nadal reinforced the idea that the hardest thing to do in sport is to beat him on Chatrier on the third Sunday.

“We are seeing things in tennis we are never going to see again being done,” said Greg Rusedski as Nadal disappeared for a wardrobe change. Well, until Roger, who again ducked out of this year’s battle on the clay, lands at Wimbledon perhaps.

Shell-shocked Thiem sat back in his chair like the 16 other opponents Nadal has beaten in his 17 Grand Slams wins.

“Congrats, well done and damn sure you will win here in the next couple of years,” said Nadal with Thiem looking upwards at the darkening sky entirely underwhelmed.

Ireland understood what Thiem was up against in the Suncorp Stadium. Australia’s hard-hitting game against Joe Schmidt’s side on Saturday morning was an 80-minute back court rally with Nadal. First set to Michael Cheika in that.

1 Rory McIlroy hoping course-and-distance form will stand to him at Harding Park
2 Gareth Bale left out of Real Madrid squad to face Manchester City
3 Seán Moran: Boylan documentary offers a compelling insight into former Meath boss
4 The Offload: Schools rugby talk in the Seanad appears tone deaf
5 Arsenal announce plans for 55 redundancies due to effect of coronavirus
Real news has value SUBSCRIBE
Here is your handy guide to sport on television this week