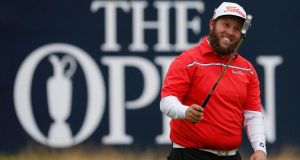 Andrew Johnston is the 27-year-old golfer from London who parties and likes his mates, actually has mates. Beef’s beard makes Shane Lowry’s look like a finely sculpted piece of artwork. His smile is a million dollars. Photograph: Craig Brough/Reuters

There is no getting away from it. Monty is a divisive figure. Every time you see him it’s not the rough that comes into play but an Alan Partridge dream sequence. Monty in the shower wearing a bathing hat and singing Fernando. “Can you hear the drums Fernando?” It tends to haunt you.

Sky, they do throw names at you, and after the BBC coughed up the broadcasting rights for the first time since Jacobite John Rattray won the 1744 the Gentlemen Golfers’ Competition for the Silver Club, the Murdoch network now charges the green fees for their coverage of all four Major golf competitions. In that light there was a frisson of the old Beeb, almost as if viewers used to Peter Alliss and the hallmark of magisterial coverage still needed the umbilical cord of Aunty. For that they gave us a stirring rendition of the Robert Burns poem A Man’s A Man For ‘A’ That. “It wud bring a tear to your eye,” observed commentator, Ewen Murray.

Issues of life and struggle

But with the choice of the Burns piece, you wonder did the producers get this one right. A poem about egalitarian ideas to introduce a tournament in Royal Troon, a club that on July 1st, 2016 voted to admit women for the first time, only to avoid potential controversy while staging the Open.

Host a fourball on the course Monday-Thursday will take €1,052 out of your wallet. You do miss the Old Head of Kinsale boom-time prices. Or as Burns said in Ayrshire dialect: Gie fools their silks, and knaves their wine, A man’s a man for a’ that. For a’ that, an’ a’ that.

Phil Mickelson – the crowd favourite along with Beef and Rory – was the weekend’s Roger Federer of the links. The two of them are disciples of the rules and traditions of their games, and they lack convention in how they play them. Impressionists both.

The aging, lovable Californian with a cold golf heart is running out of chances at winning on Golf’s Centre Court. “The object of golf is not to win but play like a gentleman – and win,” Sir Nick said Mickelson had said.

Faldo packs a lot into his cameo turns in the studio. He gives the impression he’s rushing off to his bigger earner on another, bigger network that goes out to a bigger audience. Sir Nick is good at the jargon and speaks it like his mother tongue. “Club comes inside. Club face square. Using the big muscles. Good rotation. Look where his wrists are at the top of the back swing. Right shoulder, trap it. Get you belt buckle going through,” said Sir Nick at one of the good swings before a cautionary warning. “You can make a quick double at the wrong time.”

So right he is. Faldo won his first of his seven Major titles at Muirfield, the club that recently failed to get the two thirds majority to change its policy on admitting women. Back in the day Faldo, unusually, used a woman caddie, Fanny Sunesson. Nasty Nick the tabloids called him in the 1980s. The man’s a contradiction and – counterintuitively – is likeable.

“Call me what you want man,” says Beef, aka Andrew Johnston. He’s the games face of youthful normality, a different type to Jordan Spieth or Rickie Fowler. Beef is the 27-year-old golfer from London who parties and likes his mates, actually has mates. Beef’s beard makes Shane Lowry’s look like a finely sculpted piece of artwork. His smile is a million dollars.

In the closeted environment of courses such as Muirfield and Royal Troon, and in a corporatised, blue-chipped, sanitised sport such as golf, where Monty and Sir Nick fit in seamless and snug, Beef’s personality is already an asset.

His recent Tweet on how to play golf: “4 man Team. Speed Golf. Relay. Plus can a hole.”